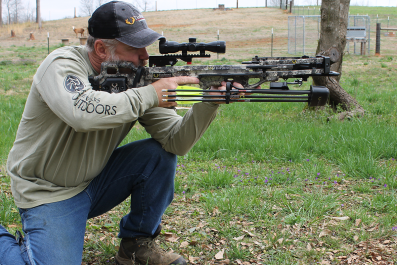 More than any other method of hunting, crossbow hunting has exploded in growth over the last few decades. Modern technology, as well as more acceptance among hunters and states, has allowed more hunters to enjoy the sport of archery thanks to the crossbow.

Before anyone blows up my email for calling a crossbow archery, let’s look at some historical facts. The crossbow is believed to have been invented simultaneously in China and Europe around the 7th century B.C. Prior to this, the long bow was the only weapon capable of launching an arrow or projectile with any speed and accuracy over distance. By turning the bow limbs horizontally, it enabled longer arrows to be launched from ground mounted bows, and it also enhanced the horse-mounted soldiers’ ability to hold the bow in a cocked position and fire when needed without interference from the horse. The ability for the crossbow to hold the bow cocked until ready to fire was a big advantage in war.

During the next several thousand years, the crossbow saw little advancement in technology. It is a simple and very efficient mechanism. The crossbow saw a decline in use after the invention of gunpowder and largely was a novelty item across the globe until the late 20th century.

During the latter half of the 20th century, more and more states were adopting archery-only seasons for hunters to enjoy more time afield. As this began, only longbows and recurve bows were available for hunters. Disabled hunters were complaining about the opportunity to hunt, so some states began allowing crossbows for disabled hunters, or those who had a physical limitation and were unable to draw a vertical bow.

The invention of the compound bow began to change the archery industry drastically. It allowed more people to participate in archery across the spectrum due to the ability to draw and hold heavier weights with the aid of pulleys.

As this began to advance archery, more hunters were taking to the woods. Crossbow companies in the 1980s saw an opportunity to advance their sport and began using the same technology used in vertical compound bows and incorporating them in their horizontal bow designs. As this began to happen, archers were lobbying their respective states to allow crossbows for anyone who chose to use them, arguing that they allow older and younger hunters more opportunity to participate in the hunting lifestyle without limiting them by their ability, or inability, to draw a vertical bow.

Gradually more and more states began allowing the use of crossbows. Some, at first, only allowed them during their gun seasons, while others began to allow them during their archery seasons. Today, 26 states allow crossbows for use during both the archery and firearms seasons, while 11 states only allow the use of crossbows during their firearms big game seasons. Many of these states have specific requirements for the crossbow configuration, so check your local state’s laws to ensure legality.

The issue of the use of crossbows has been hotly debated. Ironically, it appears that bow hunters have more issues with crossbow hunters than any other group.

Some arguments are that it is not a bow. Some say, it is an unfair advantage or that it is not a primitive weapon, when in fact, many of these same individuals are shooting compound bows – which are anything but primitive. They are shooting vertical bows that, in many cases, match the ballistic coefficient of the best crossbows. Personally, as a point of full disclosure, my position is this: “if it is legal, and it gets more people into the woods to enjoy the outdoor lifestyle, I am all for it.”

How To Start With A Crossbow

With all of this being said, how does someone who wants to get into crossbow hunting know where to begin? Let’s highlight what to look for and, hopefully, it will help you make a good decision.

The very first thing you should look at is your budget. New crossbows can range from a few hundred dollars to several thousand. And there are a lot in between. Once you have a budget in mind, you need to decide what type of crossbow you want and the crossbow accessories you need.

There are three types of crossbow configurations: recurve limb, forward draw and reverse. Choosing the type of crossbow you want will eliminate a lot of bows and manufacturers.

If you choose to keep it simple and want a recurve limb crossbow, your choices in reputable brands are limited, though there are some good ones available. A plus to recurve limbs is they are simple – nothing to tune, nothing too complicated to break. Just a string and limbs. The biggest drawback of these bows is they are big and heavy. In order to get the poundage up to acceptable levels, the limbs will often be long, making the bow’s use limited in stalking situations.

Forward draw compound crossbows are by far the most popular, perhaps because there are more companies making these than any other style. TenPoint, Ravin, and Mission dominate this market. Other great brands include Killer Instinct, Wicked Ridge, Horton, Barnette, Eastman, PSE, and others. All of these are great bows. It really comes down to your budget and preference. (Note: Some crossbows must be cocked manually, which for older and younger hunters is difficult at best. Consider getting a crossbow with a mechanical cocking mechanism or one of the aftermarket adapters.) The forward limb configuration is simple and accurate. Many of these models are approaching 360 fps with a hunting arrow.

With the speed and kinetic energy these crossbows are launching arrows, a 100 or 125 grain broadhead is ample. It is important to know, however, if you are shooting mechanical broadheads, make sure they are designed for use in crossbows. The energy these bows generate can cause some mechanical heads to open prematurely. And while I love mechanical heads in my vertical bows, with my crossbows, I use only fixed bladed broadheads, such as the NAP Hellrazor, Redneck and Thunderhead.

Reverse draw crossbows are really different in design. The limbs are exactly opposite of what one might think a crossbow should be. This design does two important things. First, it brings the weight of the bow back toward the center of the weapon, making it easier to hold and shoot steady. Secondly, the reverse limbs provide a much longer power stroke, enabling the string to remain in contact with the arrow for a longer period of time, thereby generating much more speed. The TenPoint Nitro XRT is generating speeds of 460 fps with its reverse draw mechanism. Other reverse draw crossbows include Barnett and Horton.

Shooting and hunting with a crossbow is a lot of fun. It is not like shooting a vertical bow, nor is it like shooting a gun. It seems to have its own sensation for shooters and hunters. The advantages of being able to get more hunters afield is a big reason for the explosion in growth. As the hunting population ages, I can see a lot more archers moving to the crossbow arena.

Personally, I look forward to getting out with one of my crossbows annually. It is a different challenge, and one I embrace. In fact, this turkey season, I will be hunting with the crossbow exclusively. With virtually the same range as a shotgun, it will be exciting to try and get a turkey with the crossbow. If you are interested in a crossbow, go to your local archery shop and shoot a few to decide which is best for you. You won’t be disappointed.