There are dozens of laser rangefinders available, with a vast array of features and a wide range of prices. The Nikon Monarch Gold LASER1200 Rangefinder is a high quality, medium priced model that ranks at the top of the list of dual purpose units for hunting with guns and bows. Thus, it can be expected to perform well in most hunting situations, and will not disappoint. Read on for a detailed evaluation. 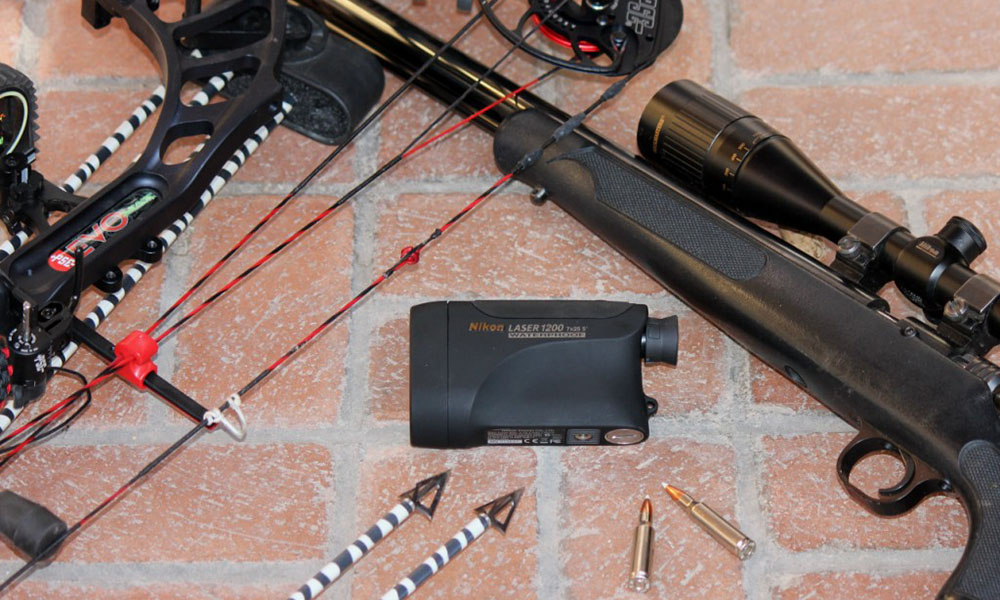 2015 marks 20 years since the hand-held laser rangefinder was introduced to the hunting world by Bushnell. The concept – employing the “time of flight” principle – was simple; bounce a laser pulse off a distant object and record the time it takes the reflected pulse to return to calculate the measured distance. Development over the first ten years focused on more powerful lasers and sensitive receivers to improve performance and smaller, lighter housings to improve functionality and handling ease. Over the past ten years manufacturers have differentiated rangefinders into several model types according to their intended use (archery, hunting, target shooting, golf and even forestry applications), adding features specific for each. Today we have rangefinders with better quality optics, lasers emitting sharper pulses, and faster receivers that produce nearly instantaneous distance measurements, all packaged in ergonomic housings.

Early on I tried a couple of different models, but for the past 10 years I have used a Nikon Monarch LASER800 almost exclusively, for both bowhunting and gun hunting. This is the older, but smaller sibling of the Nikon Monarch Gold LASER1200 Rangefinder that is the subject of this review. The old idiom that quality will stand the test of time is manifest here, as this model has been around for several years yet remains one of the top rated laser rangefinders, even among newer models with more features. We will take a good look at the reasons for its popularity but first, some background information. 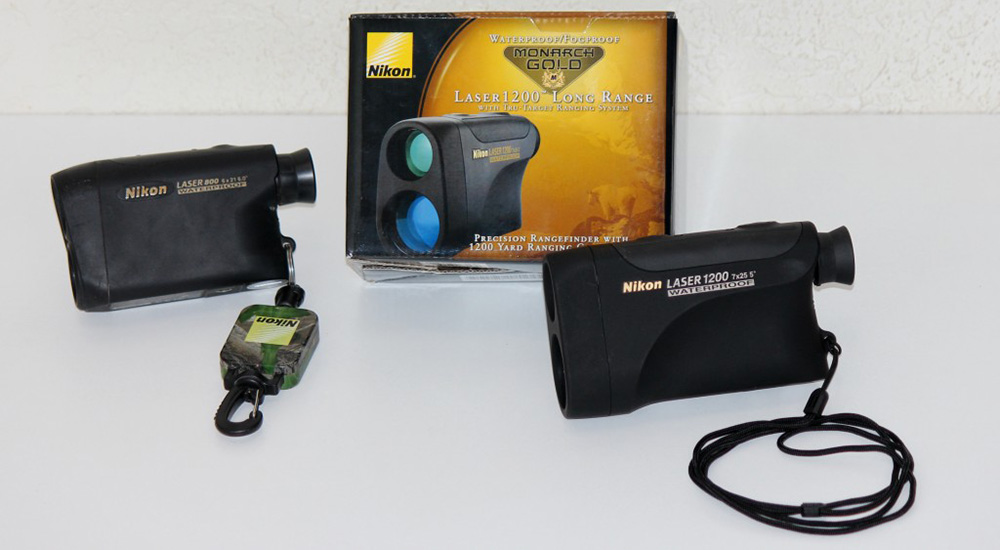 Understanding the different rangefinder categories and features important to each will help to position the Nikon LASER1200 among the dozens of available models. There are two basic groupings; cost, and functionality based on intended use, with sub-categories in each group. Let’s address the cost issue first. Sub-categories in this group include economy, premium, and everything in between, which for lack of a better term we will label as “basic.” Cost is often an important consideration when purchasing your first rangefinder, and a much lower priority when a replacement rangefinder is purchased! There are some good economy class rangefinders out there from manufacturers like Nikon, Bushnell, Simmons, Leupold and Redfield, with prices under $200.00, but buyer beware – there is also some junk in this growing sub-category. The premium group includes models from Leica, Swarovski and Zeiss that vary in price from $600.00 to $1000.00, and these are almost always purchased as replacement rangefinders. The middle-ground or “basic” sub-category includes models from manufacturers listed above, as well as Weaver and Vortex, and this is where we find the Nikon LASER1200. Interestingly, marketing data shows that this rangefinder is most often purchased as a replacement, like models in the premium grouping, and with comparable functionality ratings and customer satisfaction scores!

Narrowing our focus to hunting rangefinders, we find four groupings according to intended usage; archery, rifle hunting, dual purpose and target shooting. Bowhunters want a compact, lightweight rangefinder that can be used with one hand and accessed quickly. These are often worn like a necklace around the hunter’s neck, carried in a holster on the belt, or suspended from a tether like the Nikon Retractable Rangefinder Tether, which I have found to be particularly useful in a tree, and on the ground. A wide field of view for quick acquisition of comparatively close range targets is important, so low magnification of 4x-6x is preferred over higher magnification. Today, all archery rangefinders have angle compensation capability, and the best models have a target priority feature that is useful when hunting in cover where foliage may interfere with laser readings. Rifle hunters want a powerful rangefinder capable of measuring target animals to 500 yards and beyond. Too much magnification however, makes it difficult to hold the unit steady enough to range a small target, so 6x-7x is the norm. Secondary considerations for rifle hunters are a lightweight compact design, particularly for those who burn lots of shoe leather, and angle compensation that may be useful when hunting canyon country and mountainous terrain. If you are like me and hunt with both guns and bows, a dual purpose rangefinder will be your best choice. Finally, the target shooter – like the long-range hunter and the varmint hunter – wants high power and high magnification of 7x-8x, with clear bright optics suitable for acquiring small targets at lengthy distances. Rangefinders in this group feature a horizontal case design for two handed use which helps in holding the unit steady for long range target readings, and most include a threaded recess for tripod attachment. 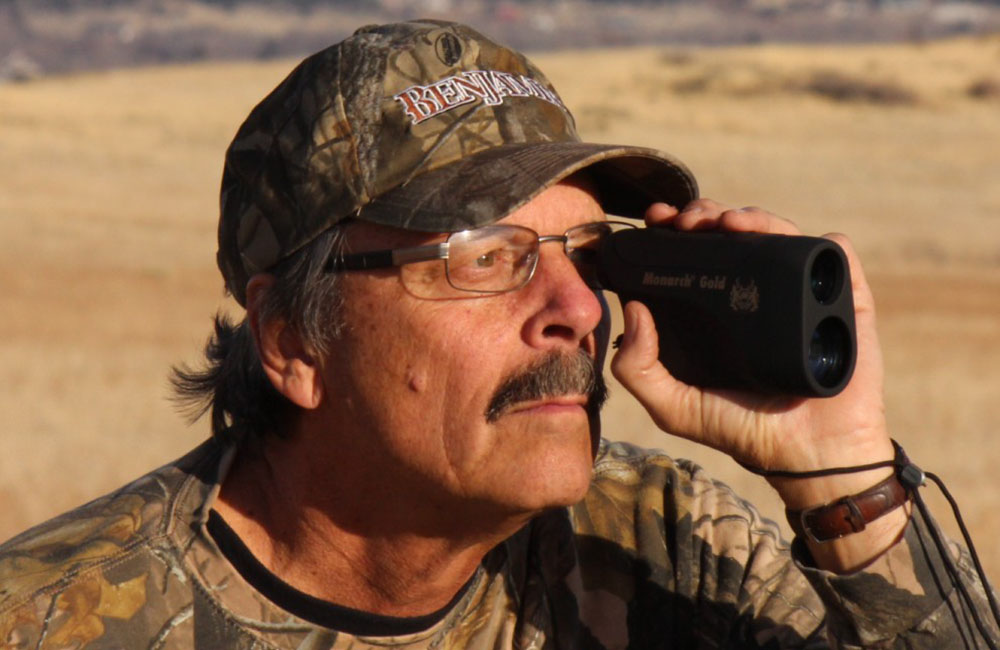 It was my pleasure to evaluate the Nikon Monarch Gold LASER1200 Rangefinder for a full week in January 2015, in a variety of weather conditions ranging from clear to light rain to light snow, in temperatures from 22 to 55 degrees Fahrenheit, and at elevations from 5600 to 9200 feet in the White Mountains of eastern Arizona. Although this rangefinder was developed by Nikon with the western rifle hunter in mind and is usually categorized accordingly, a strong argument can be made to place this model at the upper end of the dual purpose category. We will skip the technical product specifications and long list of features, as they can be reviewed elsewhere on the Gritroutdoors.com website. For our purpose here, the specs and features I found most useful for hunters in the course of my review will be presented and discussed.

When considering a rangefinder purchase, it’s important to understand that the maximum ranging distance is cited by the manufacturer in ideal lighting and weather conditions for a large, highly reflective target – like a metal billboard or a multi-story concrete building – and not for a target that will absorb or diffuse the laser pulse – like the furry body of an animal or the leaves on a tree. Thus, you can expect a model rated for 1000 yards to accurately range a stationary animal at least as far as 500 yards away. And, the better the quality of the optics, power of the laser and sensitivity of the receiver, the greater the effectiveness beyond this mid-point benchmark. Following are some of the first attempt readings I obtained with the Nikon Monarch Gold LASER1200 Rangefinder. Please note that no attempt was made to validate actual distances ranged – Nikon cites accuracy of +/-1% – or to identify the maximum distance that this model would read on any given target.


As you can see, this rangefinder will read beyond the 1200 yard maximum rating on highly reflective surfaces and well beyond the 600 yard mid-point benchmark on non-reflective animals, even with less than ideal weather conditions. I found it remarkable that I was able to range prairie dogs out to 369.5 yards through wire fencing in a light rain with the unit mounted on a tripod, and cow elk out to 504.5 yards in a light snow with a car window mount supporting the unit. Holding the rangefinder in hand made hitting these targets at these distances considerably more difficult, and multiple attempts were often required to get a reading. I also found the ranging button more difficult to locate and depress while holding on the target with the LASER1200 than with my more familiar and well used LASER800 model, particularly while wearing light gloves. This difficulty may have been due to the newness of the unit and cold temperatures. Nevertheless, I would rate the performance of the LASER1200 as outstanding. 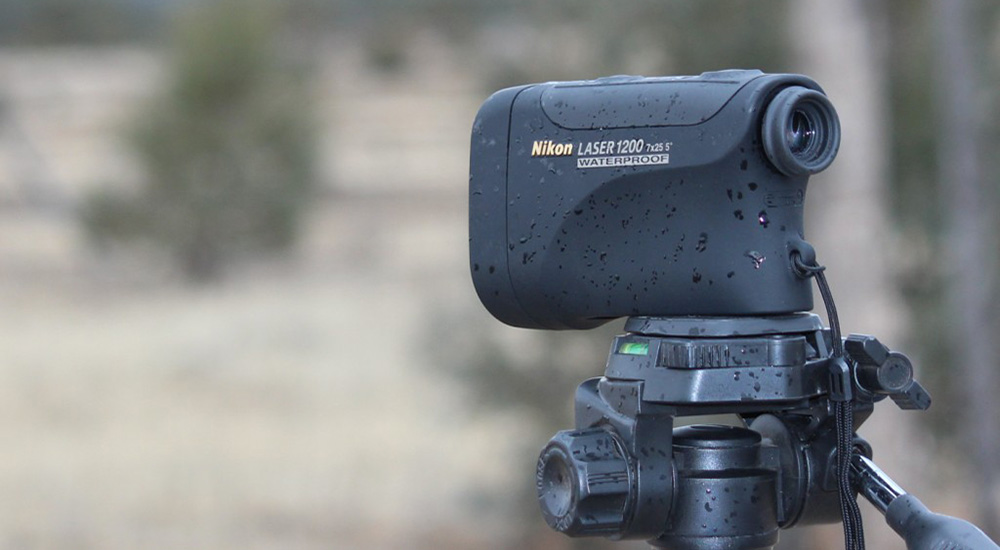 Following are features of the Nikon LASER1200 that I like and found to be useful:

The last two features are particularly useful for aging eyes and corrective eyewear. The soft, rubber eyepiece can be folded and pressed against eyeglasses. This helps to hold the unit steady, while maintaining proper eye relief. Another unadvertised feature is the generous target acquisition area in the center of the crosshair-like LCD display. I found that small targets could be ranged with the first try almost every time if placed precisely on top of the lower vertical post at the bottom of the target acquisition area, in the same manner that a post-style riflescope reticle would be used. 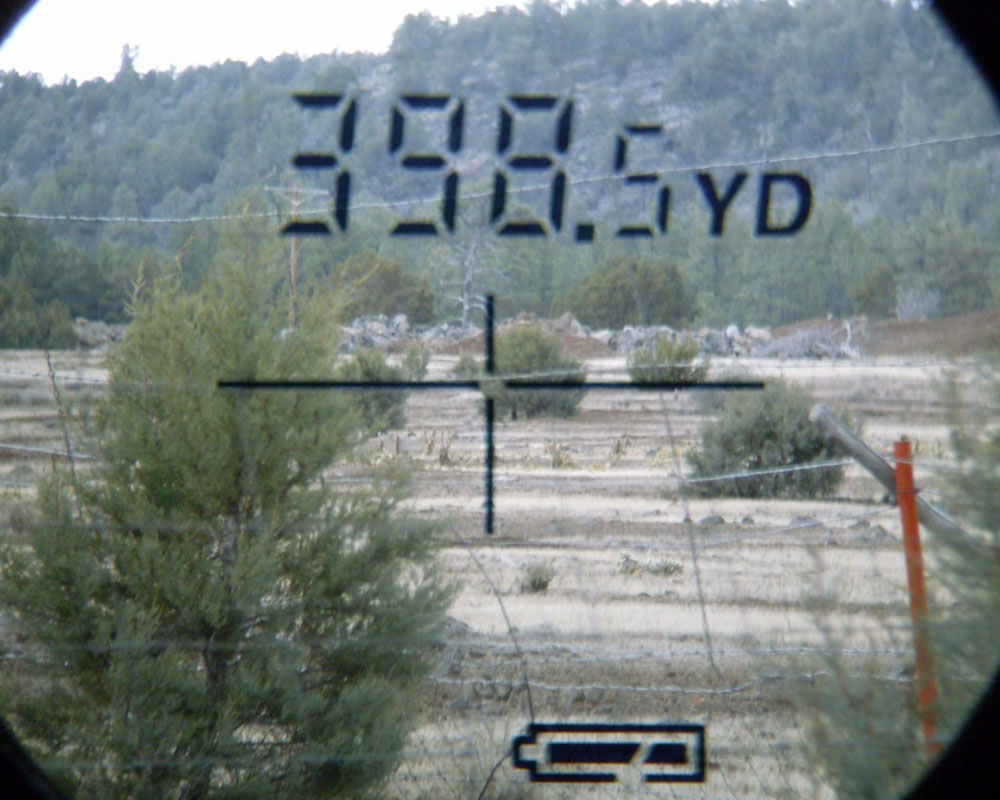 To be fair, there are a couple of things about the LASER1200 that I also don’t like. As mentioned above, I found that I would often move the crosshairs off the target when pushing the power/range button while holding the unit in one hand. Although this is a problem common to virtually all vertical orientation rangefinders, the button on the unit I tested seemed to be stiffer and a little more difficult to locate by feel when compared to other models, including my own vintage LASER800. This problem was lessened significantly when the unit was secured on a tripod or window mount, however. The LASER1200 is also a couple of ounces heavier and the housing is slightly larger than other rangefinder models. This is due to the large and powerful laser receiver that provides the lightning fast and accurate readings. While only of minor concern for most applications, the larger size housing could actually be a benefit for users with large hands. 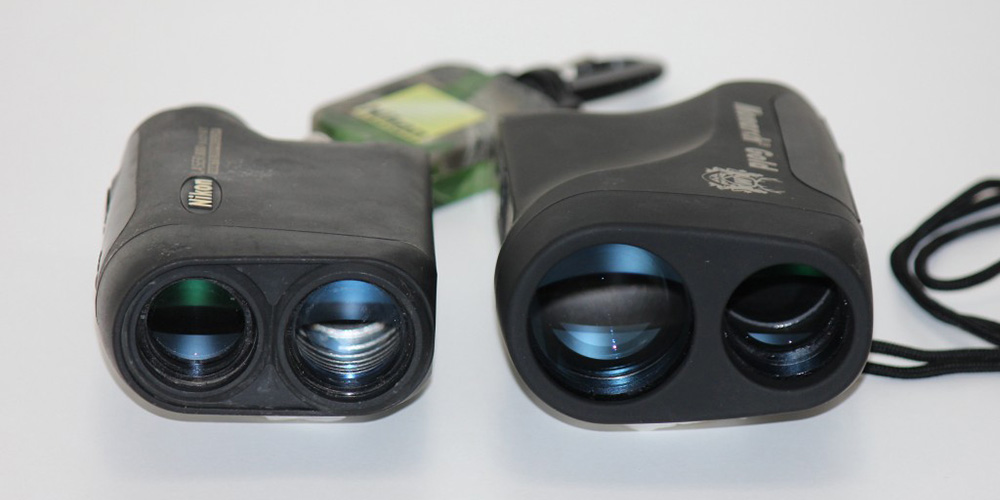 There is one popular feature common to newer rangefinder models that is glaringly missing from the Nikon LASER1200 – angle compensation. Now before you write-off this otherwise excellent rangefinder because of this omission, consider that angle compensation in all actuality is probably more important for marketing hype than it is for hunting success in the field today. If a bowhunter sits in a tree for 8-10 hours a day, day after day, does he/she really need an angle compensation feature to select the proper pin to use when a shot opportunity presents? I think not. In most situations it’s relatively easy to figure the “true” distance to all prospective shot locations within range in each and every shooting lane, and this should be done well ahead of time. I personally do not risk the movement necessary to take a laser reading from a tree at the moment of truth, for fear of spooking the animal at such close range. And, what about the rifle hunter, you ask? Despite the current long-range hunting rage, 90% of all hunting shots are taken at less than 400 yards. With today’s flat-shooting rifles and modern ammunition, a 200 yard zero allows the hunter to hold dead-on a deer sized animal out to 400 yards. With the exceptions of long-range rifle shots in excess of 500 yards taken while hunting in mountainous terrain where elevation differences are extreme, and arrows launched from exceptionally high tree stands, angle compensation provides only marginal value to the average hunter in my opinion.

The final test comes in putting your money where your mouth is… so here goes. Would I purchase the Nikon Monarch Gold LASER1200 Rangefinder?