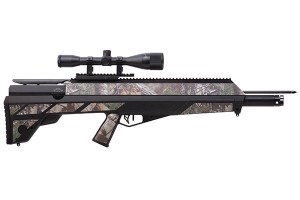 Crosman announced a new addition to their Benjamin hunting line at the Archery Trade Association show early in January. The “Pioneer Airbow” immediately generated an unprecedented level of interest within the hunting industry, particularly among archery and airgun enthusiasts. A video showing professional hunter Jim Shockey downing a 2000-pound bison with this remarkable new weapon went viral immediately upon its release. And, the new Airbow – a .35 caliber big-bore airgun adapted to shoot arrows rather than slugs – was highlighted in my Best of SHOT Show – Hunting report for 1800GunsAndAmmo.com later that month.

As mentioned in that review, it has been my privilege for the past several years to field test many of the new airgun offerings from Crosman Corporation, including the Pioneer. To date, I have launched close to 500 arrows with a prototype model, and have been credited with taking the first predator(s), with this delightful new hunting tool. Although not the first airgun to shoot arrows rather than pellets or slugs, the new Airbow is also not a toy. It’s truly a legitimate alternative weapon for limited-range hunting. With comparable performance and functionality that is superior to top-of-the-line crossbows, the Pioneer has already proven capable of taking down North America’s largest game animal.

It should be noted that not all of the attention directed toward the Pioneer has been positive, however. Some archery hunters are concerned that it will affect their deer seasons, and hardcore traditional bowhunters typically hate it – in much the same way they hated the encroachment of compound bows and then crossbows on what was believed to be their hunting domain. But time marches on, and there is no question that new technology has facilitated growth in the hunting industry – which is a good thing for all who hunt, traditional or modern.

Based on a modified version of the bullpup chassis from the Bulldog .357 caliber pre-charged pneumatic airgun introduced last year, the Pioneer is 33-1/2 inches long and weighs 7 pounds. It fires up to eight full-size arrows with a full 3000 psi charge in the onboard air reservoir, at virtually identical velocities of 450 feet-per-second (fps) due to an internal pressure regulator. Arrows are 26-inch, 375 grain Victory models with nano ceramic ICE coating. The Airbow generates up to 168 foot-pounds of energy (FPE), with an applied force of 150 pounds (lbf) over a 25-inch power stroke. This compares quite favorably with premium crossbows that fire shorter “bolts” typically slower than 400 fps, and generating up to 110 FPE from 150-180 lbf over a 16-inch power stroke.

Crosman advertises that the Pioneer will shoot 2-inch groups at 50 yards, comparable to the .357 Bulldog shooting 145 grain slugs. I can personally attest that this claim is modestly understated. My third shot with the Airbow was a near robinhood at 25 yards, and arrows routinely hit the same hole at 50 yards! Since arrows are essentially pulled from the front by air rather than pushed from the rear by a string, there is no “archer’s paradox” (arrow shaft oscillation). The arrow rest fits inside the hollow carbon arrow, and this steel tube also serves to deliver the air charge near the head of the arrow. When an arrow leaves the 25-inch long rest, it is already flying about as true as an arrow can fly. Factor in an excellent 2-stage trigger with no recoil, and the effect of the internal pressure regulator at controlling velocity, and remarkably consistent point-of-impact is the result.

Fill the air reservoir through the exposed filling port located at its end via a quick-connect nipple (supplied) for attachment to a hand pump or high-pressure charging system. Slide an arrow over the rest and seat the patent-pending collar (which replaces the nock of a standard arrow) with hand pressure. Cock by lifting the lever mounted on top of the stock (which requires only 2 pounds of force), release the trigger safety, aim and shoot. Follow-up shots require only a few seconds. The Airbow is just as easily de-cocked without firing, and the loaded arrow is easily removed from the rest. In the words of good friend and gunsmith Shane Clark on our first predator hunt with the Pioneer: “…this is just too easy.”

The compact Pioneer points quickly and is easy to hold steady freehand, or rested on a bipod or shooting sticks. A 6x40mm CenterPoint scope with custom MTAG reticle and a canted Weaver base are included. With a 30 yard zero, I find that each horizontal hashmark on the vertical axis represents 5 yards. Thus, the 4th hashmark down from center puts the arrow precisely on target at 50 yards. Taking varmints and small predators with arrows requires precise shot placement, and the Airbow is certainly up to the task. These large diameter arrows are wind-prone however, and windage hashmarks on the horizontal axis of the reticle are useful when conditions warrant hold-off. Accuracy and terminal energy generated by the Pioneer will allow hunters to push the effective range for larger animals like deer and hogs well past 70 yards in my opinion, as hitting a paper plate consistently at 100 yards is no problem when winds are calm.

Despite the truly amazing performance and easy operation, there are some negatives. The open front of the weapon – which makes it easy to load arrows – is exposed to the elements, as well as potential contamination from dirt and debris in the field. I have found this to be a problem crawling through brush while moving into range for a shot. Furthermore, the pressure gauge is screwed into the end of the air reservoir, and also exposed at the front of the weapon. Banging this on a tree or a rock while climbing can cause an air leak, effectively ending the hunt. I have experimented with both hard plastic (motor oil container) and rubber (tire tube) homemade covers, and it’s apparent that professional design assistance will be required to create a functional solution. And, although the CenterPoint 6×40 is a nice optic for precision accuracy, the field-of-view is not wide enough for much of the close-range hunting I have done. I plan to experiment with a 4x wideview, and possibly a red dot model like the Bushnell Trophy First Strike 5 MOA Red Dot. 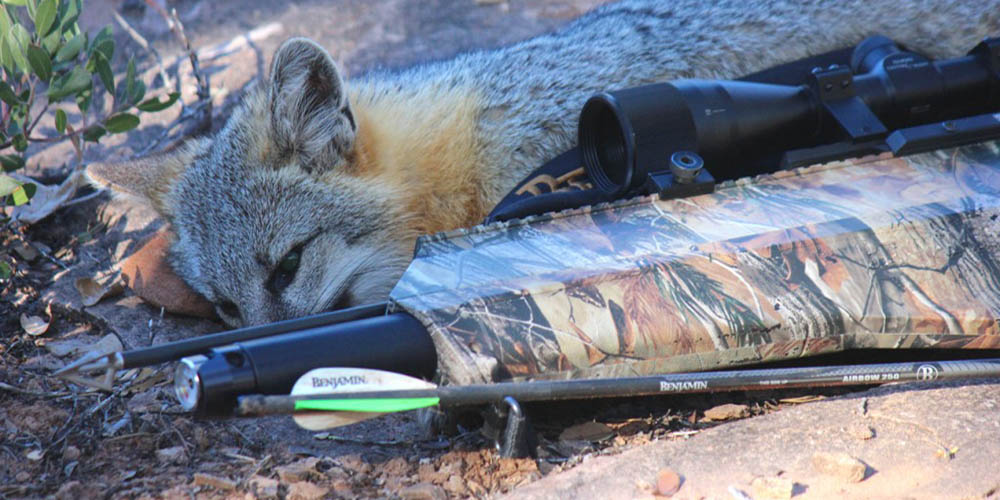 A final note of concern is legality of this new class of hunting weapon. Generally, the Airbow will be legal for hunting where .35 caliber pre-charged pneumatic (PCP) airguns are legal, and the projectile is not defined – but it’s best to check with authorities as regulations vary considerably from state to state. Crosman provides info about legality on their website (http://www.crosman.com/airbow), and tools to guide hunters through the process of gaining regulatory approval. Although it’s a pneumatic weapon the Airbow functions like a crossbow, firing from the shoulder and releasing an arrow with the pull of a trigger. Thus, some states have already approved the Pioneer for use in designated crossbow seasons.

Although almost anyone can easily handle the Airbow, its greatest application may be for those with physical limitations that prevent them from using a crossbow. Safety is another outstanding feature. With no cocking rope and no energized limbs, the Pioneer is safer to use than a crossbow, particularly in a treestand or the confines of a hunting blind.

The Pioneer Airbow is competitively priced at $899.00, and it provides about as much fun as one can have with a limited-range hunting weapon. Excitement for the revolutionary new Airbow will surely be re-kindled as Crosman starts filling the mountain of pre-production orders. Initial shipments are set to begin in mid-April.