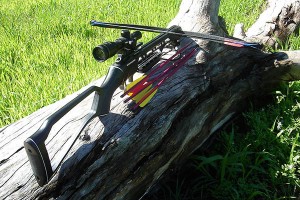 Crossbow hunting and target shooting, like bow hunting, is an exciting and growing sport in America, and more and more crossbow enthusiasts are showing up in states all over the country. Crossbow shooting has its own unique appeals, and among them is the ability to use a crossbow like a rifle while still being confined to the range and challenge found in archery. However, unlike a compound bow or a rifle, crossbow operation requires an entirely different set of steps. Let’s take a look at the basics of crossbow operation and then follow it up with some tips on operating a crossbow. 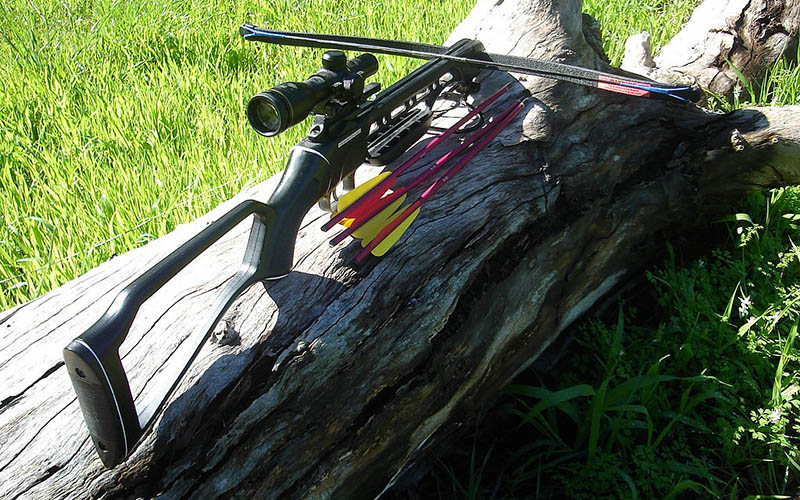 Much of the uniqueness of a crossbow comes in how it is cocked. Let us first say that cocking a crossbow isn’t for everyone, and you should never just wing it and see what happens. Similar to a compound bow, when you place a device like a crossbow under pressure, you need to always treat it like a loaded weapon – and NEVER, EVER dry fire it. You also need to be aware of where your fingers are at when you pull the trigger, and you need to always ensure there is enough space around the crossbow for the limbs to operate unhindered. This can be especially challenging in a deer stand, where wayward tree branches can easily get in the way when you’re not careful. Don’t fool yourself, modern crossbows may not look like the medieval crossbows you see in the movies, but they all operate pretty much the same, and the concept has not changed. Now that our words of caution are over, let’s get back to the three main ways you can cock a crossbow.

This first method is pretty self-explanatory, and you essentially secure the crossbow and pull the string back until it is cocked. Most crossbows have a stirrup, similar to what you’ll find in a horse saddle, and to start this method, you place the front of the crossbow down on the ground and put your foot in the stirrup. Next you show off your weight lifting skills and pull the string up towards you until it is secured. We say weight lifting because it takes significant strength to manually cock a crossbow. Anyone who isn’t capable of pressing well above 100 pounds of force will find this method impractical. However, those who are fit and ready for the challenge will find they can cock a crossbow quickly anywhere they go.

One other note on manual cocking, you need to ensure the sting is exactly centered when you secure it. If say 55% of the string is on one side of the bolt and 45% on the other, the bolt won’t fly straight and rather will be skewed when you pull the trigger. The best way to combat this issue is to mark your string at exact center so you can gauge it while you’re pulling up the string.

Cocking With A String

If the manual method seems a bit too demanding for you, there are a couple alternative devices you can use instead. The first is a string and pulley system that uses a simple machine – the pulley – to cut the draw strength in half. However, by relying on this simple machine to do part of the work for you, the length you have to pull to cock the string is doubled. This means if you aren’t very tall, it can be difficult to get the string all the way up into position. This method also takes more time than manual operation, and you have to keep the pulley and string around for reloads. Still, the reduced draw strength makes a difference for most who can’t quite cock a crossbow manually.

Cocking With A Crank

The final cocking method involves the use of a crank to do the work for you. Anyone who is disabled or unable to physically cock the string will have to rely solely on this method to get their crossbow ready to shoot. This device is located or mounted near the end of the crossbow, and if you’re concerned about draw strength, it’s best to get a crossbow with a crank built into the body of the crossbow. The cocking operation remains pretty much the same. The crossbow front is placed down and the operator winds the crank until the the string is cocked. Those who use a crank will also benefit from added accuracy when centering the string. Most crossbow owners should probably own a crank either as an add-on or built into the crossbow. It takes far less strength than the other two methods, but like the pulley, it will take longer for someone to reload with a crank vs. manual cocking.

Once your crossbow is cocked, well the only way to de-cock it is to fire it. Again, PLEASE don’t dry fire your crossbow. Instead, either fire an inexpensive bolt with a field tip on it or get a flat tipped bolt designed specifically for the purpose of de-cocking a crossbow. Of course make sure you fire the bolt in a safe direction. While it is ok to have your crossbow cocked for a while, never leave it cocked after you’re done for the day, and never transport it in your vehicle cocked.

Now that you’ve got your crossbow cocked and ready to go, it’s time to talk about the range of the weapon and how optics come into play. One of the major advantages of a crossbow is the ability to mount a scope to it. This gives you reliable accuracy from a platform that is similar to firing a rifle, and the shorter distance from crossbow butt to scope makes issues like insufficient eye relief scope eye less of a concern. This said, don’t go out and buy any rifle scope and mount it to your crossbow. The operation of the crossbow string puts a unique strain on the rifle scope, and you’ll want to buy a crossbow-specific scope instead.

Crossbow scopes also come in magnification levels appropriate to the range of a crossbow. It’s a mistake to mount a very high power scope to a crossbow as the low field of view will make it almost unusable and your bolt won’t accurately fly that far anyway. Most would agree that 5x scopes are more than enough for crossbow magnification, and you should consider the benefits of a variable power crossbow scope, even something like 1-5x or 1.5-5x. Certain crossbow models will come with a scope included, which can be fine depending on the brand, but make sure you’re getting a decent scope if you go for the crossbow / scope combo.

Dialing in a crossbow scope is similar to that of a rifle scope, and you’ll need to make elevation and windage adjustments based upon how your bolts perform on paper. The optimal range of most crossbows, especially when hunting and seeking a humane kill, is generally between 30 – 50 yards. This is not to say a crossbow kill or bullseye can’t be made at longer distances, but it can become much more challenging for most to get reliable accuracy at 50+ yards. Part of this depends on bolt selection, our last thing to look at in crossbow basics.

It’s best to think about bolt weight like bullet weight. A larger grain load is going to pack a bigger punch, but when you use a larger load it is naturally going to impact range and ballistics. The same goes for a crossbow bolt. Heavier bolts will be better for hunting, especially larger game, but your max range will be inversely affected. A light bolt on the other hand will fly faster and farther than a heavier one, but it won’t be as useful in certain hunting applications.

It can be dangerous to fire bolts that are too light for your crossbow, and you should always refer to the manufacturer’s instructions before shooting a certain bolt out of your crossbow. The same goes for the length of your bolt and the weight of the field tip or broadhead on the bolt. Most crossbow bolts are 20″ long, but there are shorter and longer varieties, and you should only fire approved length bolts out of your crossbow. Crossbow bolts can have either field tip, broadheads or flat tips. Again, consult the manufacturer’s instructions so you don’t mount too heavy of a tip onto your bolts.

Image one and thumb courtesy of Wikimedia Commons.