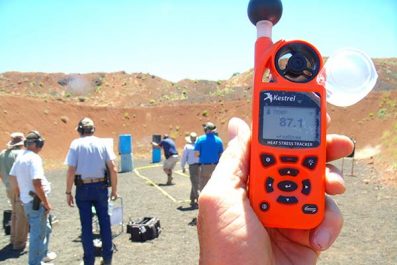 The Army recruits fell in as ordered, and started their run. At the end of the run, they were taken into an exercise room, and began the physical training. Shortly, one, and then another, they dropped to the ground – and the instructors called them lazy shirkers. But more and more fell down, until the instructors caught on – sadly, too late for a few of the troops, who died. The temperature in the workout room was about 70 degrees F – nice weather in the US. But in Europe, where this happened, at that time of year, the highest temperature was rarely up to 50. The troops, acclimated to 30’s and 40’s, died of heat stroke. The instructors has lost their awareness of conditions. However an item like the Kestrel 5400 Heat Stress Meter can help. 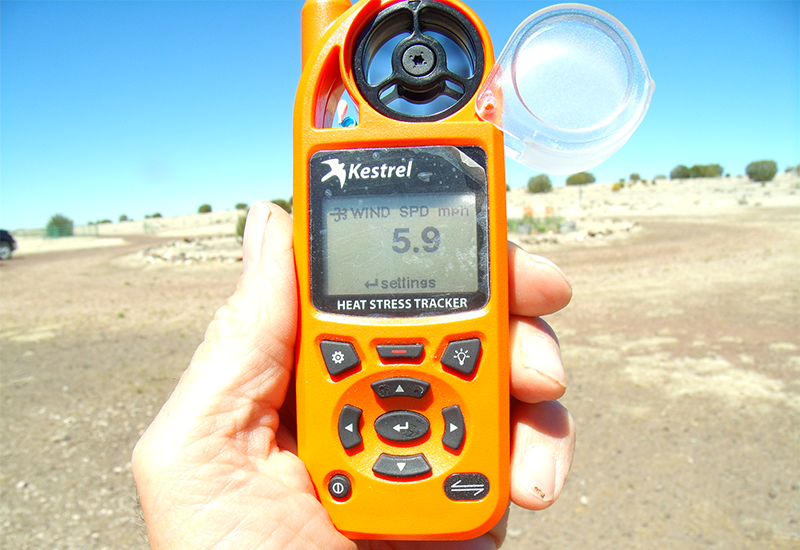 I have had personal experience of the effects of heat and humidity on performance, mostly when I was teaching at a Federal Law Enforcement academy outside of Tucson. We had trainees from all over the country, and in almost every summer class, a few would go down from heat stress. Fortunately, all of our people recovered after a trip to the ER and some IV fluids.

Later, as a volunteer Fire Fighter, I had to stand down at a structure fire when I could not cool off. All that turnout gear we were sealed in held my body heat, and added some of the heat from the fire. It was humid enough that evaporation was not taking place fast enough when I stripped my gear off, and I had to sit that one out. The conditions overcame my system, but my training paid off and I avoided the IV – I hate needles!

Times have changed, and while people still have problems with heat stress, there are now ways to tell when it is just too hot & humid to carry on. In any occupation, the real, critical assets are…the people! Be it troops, firefighters, or employees – without the people, all work stops. Push them too hard, and people die. 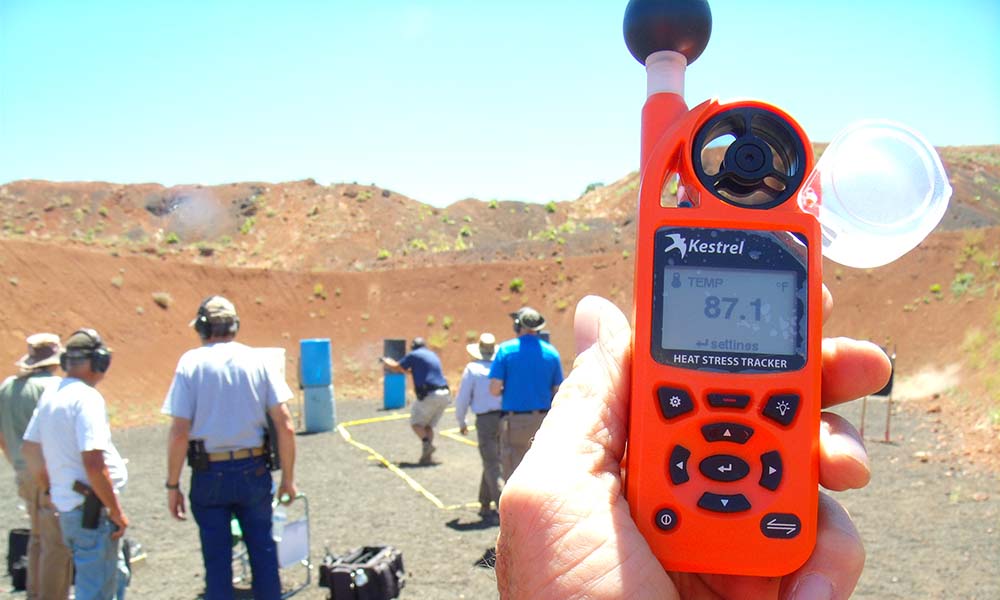 Kestrel first came to my attention with their wind meters for shooters. I had been taught to gauge the wind by watching flags, passing dust, and trees and grass. But all of these are estimates – the longer the distance, the more precise the data has to be. The early Kestrel meters were great, but do not really compare to today’s products.

The subject of this review is the Kestrel 5400 Heat Stress Tracker. It has the usual wind impeller (blades), and much, much more. In fact, the Kestrel 5400 can also measure the Thermal Work Limit. If you work outdoors, or have employees who do, this is one measurement you NEED to pay attention to! 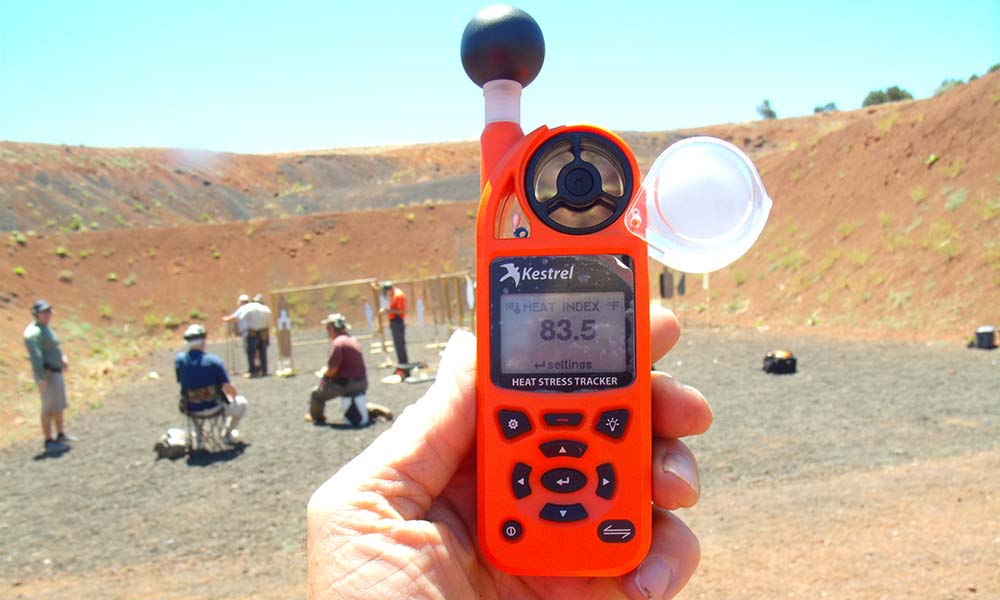 When you fire the Kestrel 5400 up, you will see the time and date. In order the screens show Wind Speed, Temperature, and Wind Chill (on the news, they call that the “feels like” in the winter). Next they display Humidity, the Heat Index (which factors in the temp and the humidity to produce the “feels like” you hear on the news in the summer). In addition, the Density Altitude reading determines if loaded aircraft can fly, and how much weight of cargo, passengers, and fuel can be on board. It is not unusual to have Phoenix Sky Harbor Airport close when the Density Altitude is so high as planes cannot generate enough lift to safely take off.

Most important to me is the Kestrel 5400 Thermal Work Limit – TWL for short. This is an estimate of the human body’s cooling capacity in given conditions. The values used were developed by the Health Authority of Abu Dhabi – and they know HOT! 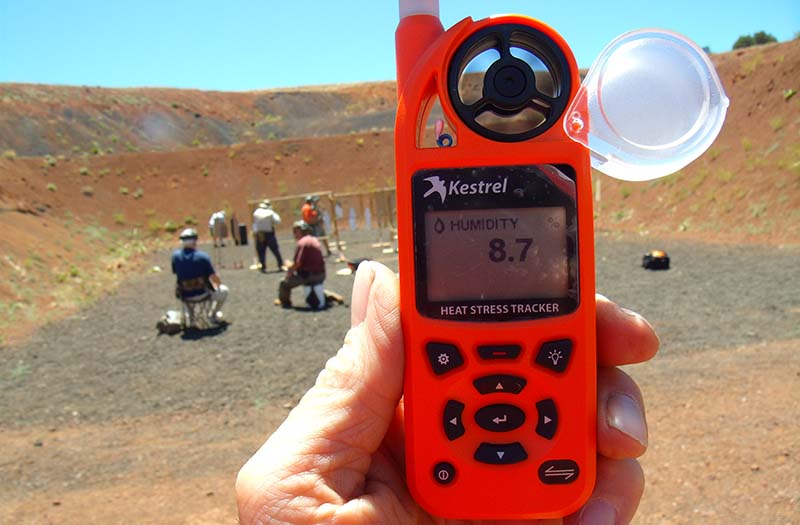 You can reset the limits for your particular climate or environment. The “no one works alone” rule is a life saver. If you go down from heat stress and no one notices, you could easily die. When the Kestrel 5400 senses conditions have reached a decision point, it buzzes and the translucent stalk for the heat sensor flashes RED.

I wish I had had one of these at the Academy! While the Arizona summers have very low humidity (until the Monsoon Season, usually starting the 4th of July), extreme heat and single digit humidity equals dehydration. The students who suffered the most were those from the East coast and South, used to high humidity and hot temps. Our extremely low humidity coupled with much higher temperatures caused them to dehydrate – and they often chose the wrong fluids. One officer, as he was loaded into the ambulance, told me “I don’t understand? I had 3 cups of coffee at breakfast!” He did not know that coffee is a diuretic, so he dehydrated even faster.

On one occasion, I was in the sun running a tactical shooting course on a very hot day – and I was fully acclimatized. I kept drinking water and Gatoraid, and at the end of the exercise I found it was 123 degrees …in the shade! It took lots of fluids and time in the air conditioning for me to get back to normal. 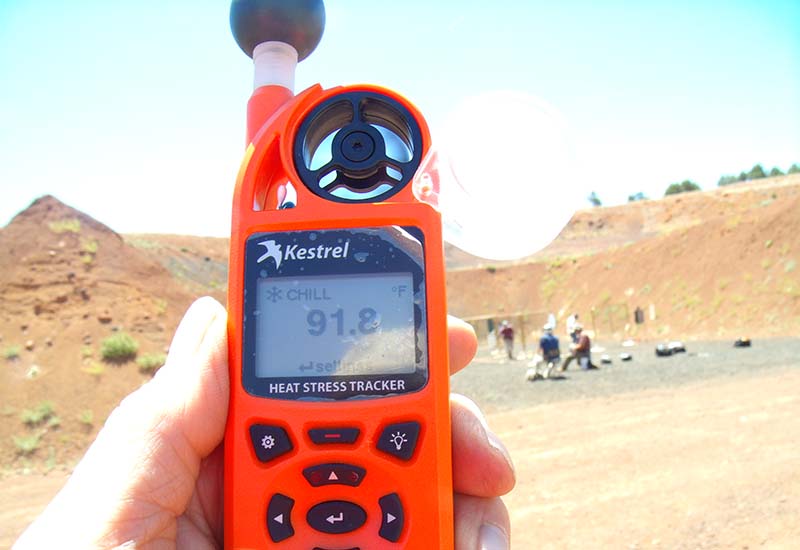 Who needs all this instrumentation? Fire Departments, Police agencies, and military units for starters. How about landscaping companies, construction firms, schools, and sports teams. Add in anyone who has people working out of doors or indoors without air conditioning. As I write this, some folks are suing a major corporation because of working conditions in their big, un-airconditioned warehouses. A single worker needing to go to the emergency room one time will exceed the cost of a Kestrel 5400. And it could save lives! Hikers, campers and those in search of outdoor recreation will find a Kestrel Heat Stress Meter worth packing before they go. Heat stress can sneak up on anyone, but not with a meter like the Kestrel 5400.