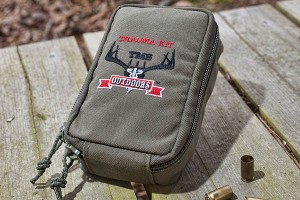 When I was doing a lot of search and rescue work, small cell phones were as rare as unicorn sightings, and the survival of anyone seriously injured in the outdoors often hinged on the first-aid knowledge of those who witnessed the accident. Today, though, fewer outdoorsmen think those skills and gear are as critical, partly because of wireless’ false sense of security.

Despite the fact help is only minutes away in most metropolitan areas—if not seconds— there are cases when the delay is still fatal. It’s going to take even longer for first responders to reach someone injured while hunting, practicing at the shooting range, camping, backpacking or even out for a short weekend hike. The mortality rates increase accordingly. 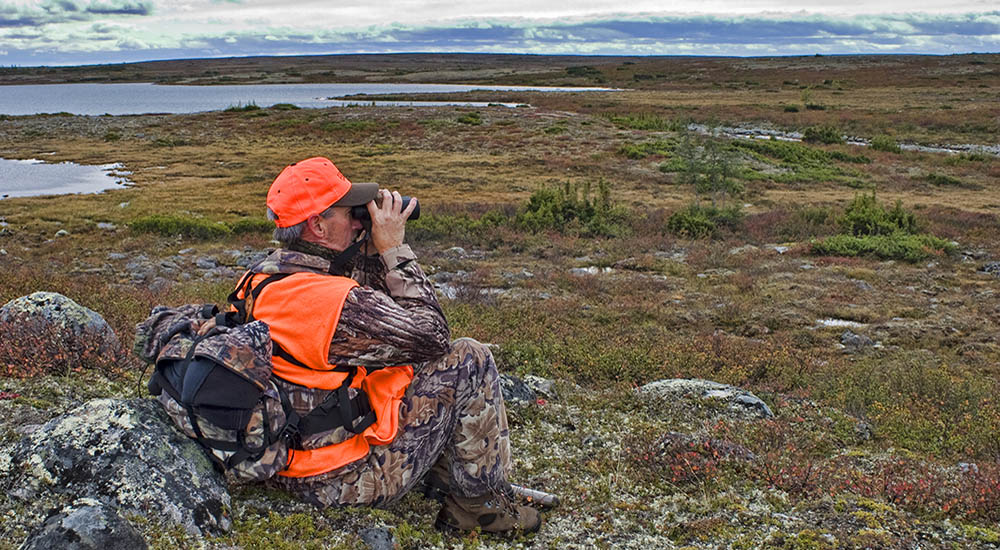 Back before everyone had a cell phone, an accident victim’s only hopes of survival often hinged on a first-aider’s knowledge and gear until rescue teams arrived. Those basic lifesaving skills were common among outdoorsmen and, thankfully, saved a lot of people. Unfortunately, too many assume their cell phone can summon instant help today, a misconception reinforced by television’s constant stream of airborne rescues in HD.

Batteries die. Electronics break and signals don’t always punch through. Calls drop in valleys, even on the Interstate, and it gets worse for outdoorsmen in remote regions. Verizon’s map looks nearly complete on the east coast, but when I backpack into a flyfishing area of North Carolina this spring, it indicates I won’t have a signal for the entire week—even on ridgelines. The lifesaving role of first aid becomes even more obvious when bad weather grounds aircraft and slows ground response. Add a more serious injuries that can claim a life in minutes, and it’s impossible to overstate first aid’s lifesaving role, regardless of location. 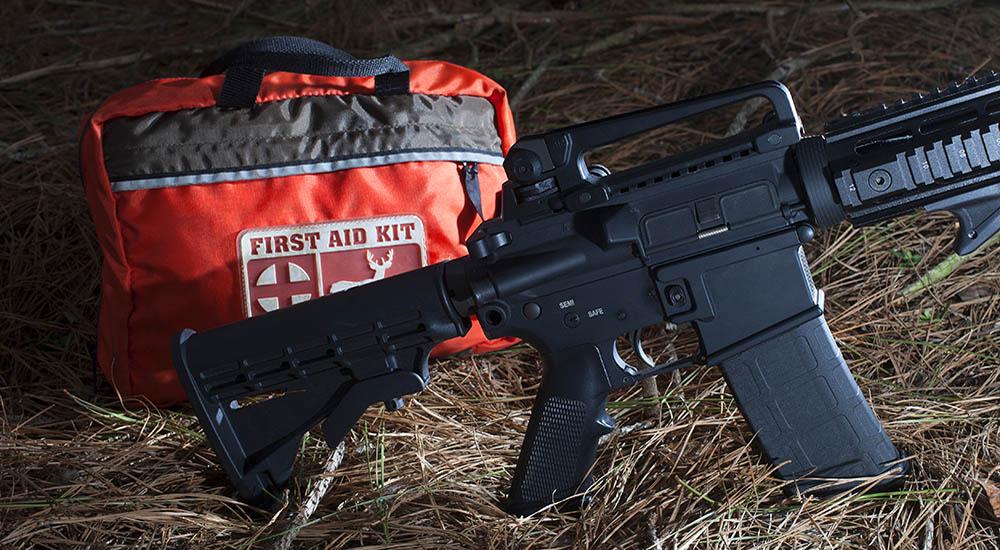 Volumes of articles cover the techniques, but I needed hands-on practice to become proficient in first aid. Grasping the principles from a textbook is easy when compared to being able to apply them in a stressful situation, calmly and coolly enough to reassure the person in trouble. Your ability to maintain a confident “bedside” manner—despite the blood, bones and screaming—is a powerful lifesaving tool. Reputable courses practice that skill. I taught courses for the American Red Cross for several years and highly recommend them, although there are other good ones out there, more than likely one near you.

At the very least, you should assemble solid first-aid kits. You don’t need to break the budget doing it, and a slow and methodical accumulation of gear allows more thought in the contents. Steer away from items you don’t know how to use. In all the accidents and remote rescues in which I’ve helped, good Samaritans with advanced training always showed up with their own tools. You can also do more damage during a stressful field “experiment,” and it opens you up legal exposure long after the incident. Stick with what you know and build as you learn.

Purchasing one of the commercial kits can provide cost savings in the long run, but the initial investment is more steep. I put an Adventure Medical Kits Outfitter version in my truck when my daily commute into the D.C. area was 60 miles—one way. It’s chock full of the kind of gear for car accidents and the scrapes, bruises and breaks common in family life. I know where it is, always, and locating that bright red, protective nylon bag is instant. The clear markings could also be a lifesaver if the unthinkable happens and a good Samaritan needs fast access to the contents to help me. Obviously, it’s along any time I visit friends and relatives, while camping or at the range, where it’s seen the bulk of its work.

Things get different when you’re hiking into a remote area, where things can get deadly bad, fast. I’m not willing to surrender enough space in my backpack to haul my truck first-aid kit. During my search and rescue work, all of us assembled compact kits that reflected varying degrees of expertise, although there were some common elements—regardless of training.

Everyone carried Band-Aids for everyday boo boos, as well as mundane supplies like medical tape, gauze (go with the “cling” version to save time and headaches), 4×4 and 2×2 pads, pain reliever, sterile strips, antibacterial wipes, moleskin for blisters, hard candy (long-lasting blood sugar stopgap), something akin to Benadryl for personal use and, in my case, a little food tenderizer for topical application to bug bites (it works wonders on the itching in some people). Knives, scissors and tweezers usually rode along in a multi-tool or Swiss Army-style knife.

Once you’ve assembled all the basic ingredients, every item should be contained in a single waterproof nylon sack or bag. In an emergency, digging around for tape that’s migrated to the bottom of a pack wastes time and doesn’t reassure the victim in your skills. That single container brings everything to your fingertips, simultaneously, quickly and efficiently. Its location should be readily accessible (top of the pack/or outboard compartment). 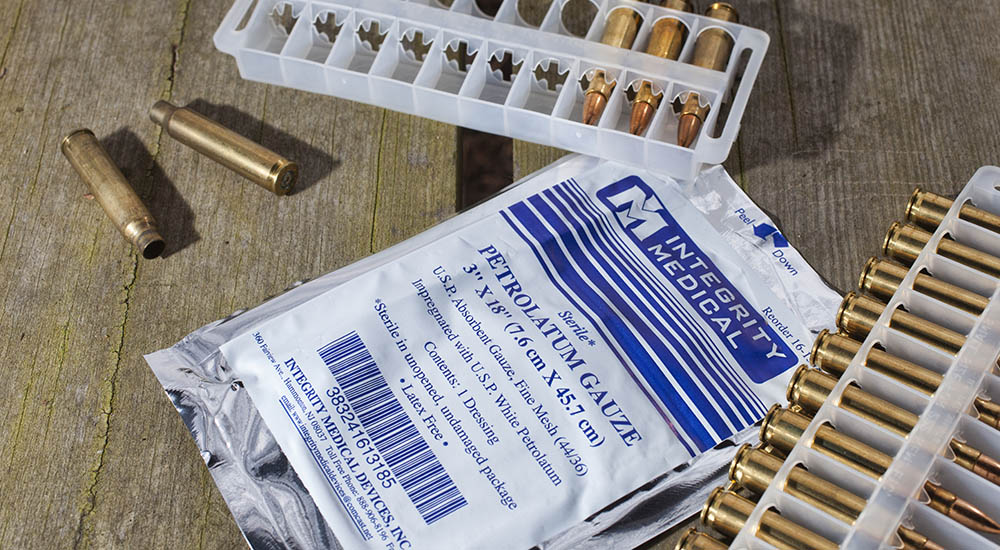 None of the above-mentioned items address grave situations, though, and just how far we’ve come in emergency medicine is obvious in changes fueled by the global war against terrorism. Those lessons have altered what I keep on hand, particularly in my remote-use trauma kit. For example, I’m still gun shy about using a tourniquet, but a quickly applied version included in each deployed member of the U.S. Military’s Individual First-Aid Kit (IFAK) has saved countless lives. Research conducted by the Department of Defense during the conflict has determined a lot of my initial misgivings are unfounded. Personally, it’s still my last resort, but a pre-packaged and quickly applied version beats MacGyvering a belt, sticks and medical tape while under stress. They’re small, weigh very little and with luck my investment will never need replacement because it’ll never be used.

Bear in mind, too, the constrictive approach to stopping uncontrollable bleeding isn’t the exclusive realm of combat. If an outdoorsman takes a spill and breaks his upper leg, there’s a chance those bones can pierce the femoral artery, exposing it and pumping blood at a rate furious enough to claim his life in minutes. Regardless of your location, a call to 911 is probably too late. Stopping that arterial bleed by direct pressure is a challenge, although it is possible. If those efforts are unsuccessful, a tourniquet applied above the leak could keep the person alive long enough to be transported to the hospital instead of taking a one-way ride to the morgue.

I’ve added a military-grade tourniquet to each of my emergency kits. They are not expensive, extremely small and light, the nylon strap lasts forever if kept out of the sun and sealed bags ensure they remain germ free. They usually come with instructions, but it’s probably best not to familiarize yourself with them in front of the victim. 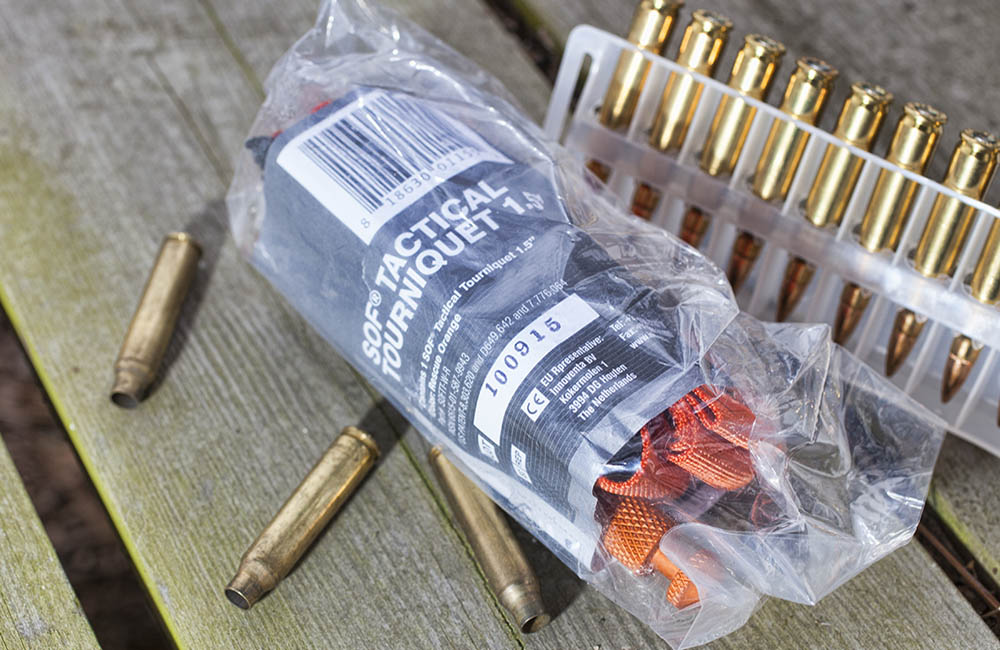 QuikClot is another relatively new product that’s proven very successful. It’s infused in the dressing or bandage and “clots” when applied to a serious wound that refuses to stop bleeding. It shouldn’t be your first choice, but if you’re out of 4×4 pads and things aren’t slowing, it may be your next move. There’s very little extra weight or bulk and although it’s more expensive, like the tourniquet, will probably never need to be used and replenished. If needed, though it could make a lifesaving difference. 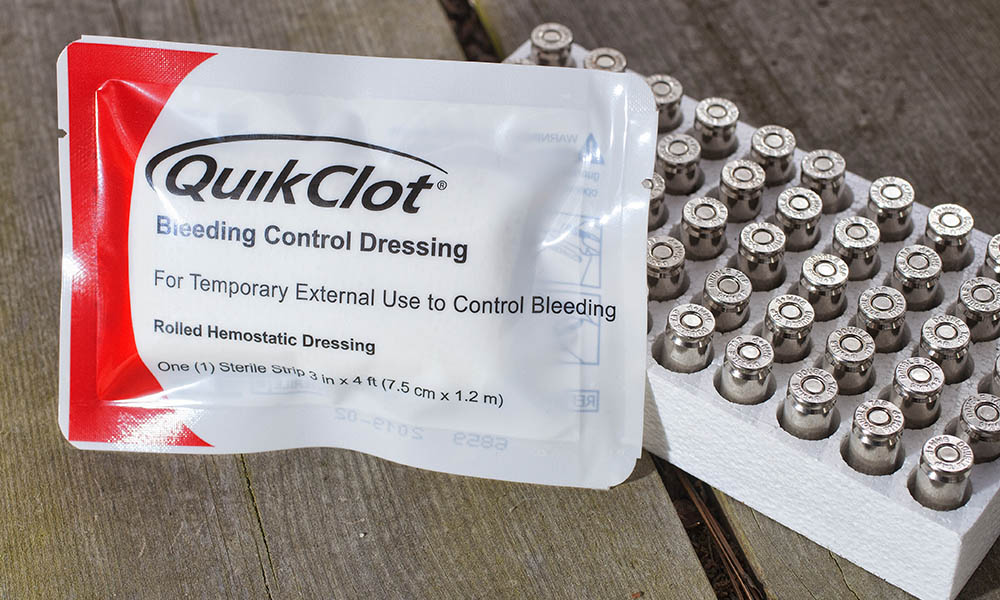 The last item I’d recommend in every portable trauma kit, especially if you’re a hunter or climber, is also a regular military IFAK resident. Petrolatum gauze pads occupy about the same space as a general-purpose 4×4 pad, but it’s capable of performing a more specific mission. We called them sucking chest wounds. The process is too complicated for explanation here, but boils down to the fact that a hole in a victim’s chest into the lung can result in it collapsing as the pleural cavity fills with air (with each of the victim’s breaths). Gun shots can create the injury. Add the chances of a moderate-length fall on an exposed branch or stick, and it’s easy to why outdoorsmen should be prepared. The last time I worked on one it was a car accident in which the driver seemed fine during initial contact, but he went bad, fast, due to a piece of metal piercing his lung.

Petrolatum gauze is a fine mesh covered in petroleum jelly to minimize the amount of air that passes through. It goes onto the wound, then the aluminum package it comes in is applied over top and taped along the sides. That should seal the leak, stop the collapse and hopefully stabilize the victim until help arrives. The technique is not something readily learned in articles, though, so get some sort of hands-on training if possible. Inadvertently applying pressure to an unseen wound or broken bone nearby, for example, can cause more trauma.

A visit to your favorite drug store probably isn’t going to uncover this kind of mission-specific gear, although a good pharmacist will help. There are many on-line outlets and not long ago I discovered a group of former Green Beret medics making fully stocked, civilian-friendly IFAKs (TMS Outdoors). A number of versions are available and I’ve been carrying the company’s Hunter’s Trauma Kit, Operator Advanced. It’s lightweight, outdoor ideal, comes with all the right gear in a nylon molle-attachable case and still offers space to personalize the contents. 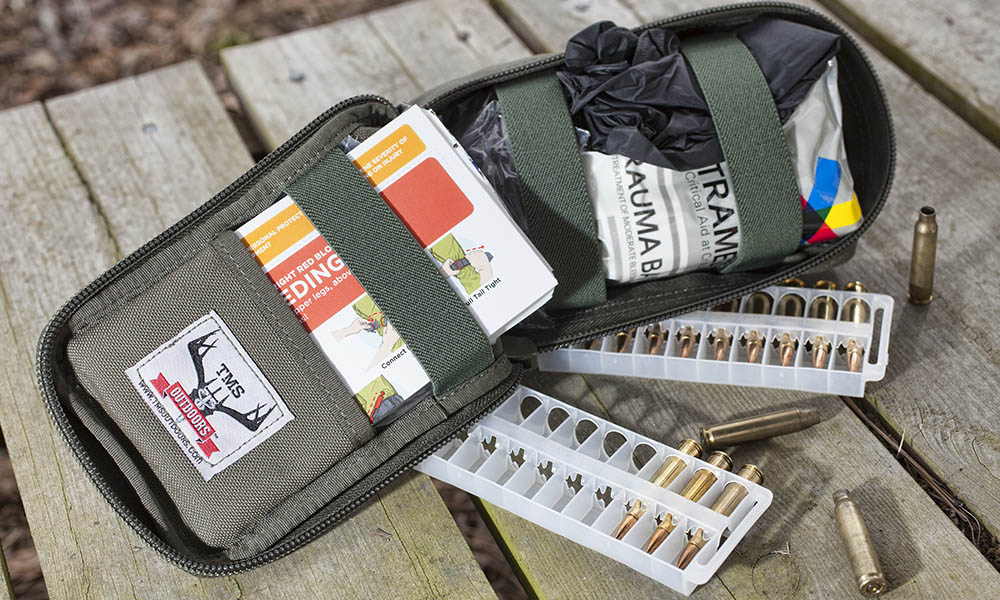 Which leads to the requirement to always address specific needs—even in you’ve purchased a commercial first-aid kit. A practical example comes from the desert southwest, where we always carried inexpensive plastic combs to “fling” jumping cactus off victims efficiently (more often ourselves, actually). Is someone in your hunting/camping party allergic to latex (like my grandson), bee stings (daughter) or iodine products? Select and modify as appropriate. Be very careful in what you give/apply to strangers. One over-the-counter medicine or topical application may be a Godsend to you, but it could make things much worse on someone else—yet another reason to attend a reputable first-aid course.

A trauma kit so heavy that you’ll never carry it, or bulky enough to be a nuisance, is of little use—especially with today’s “high-speed, low drag” gear. You’re going to leave it behind, refuse to strap it on your pack and, more than likely, forget to replenish supplies. That’s when the unthinkable likes to strike. 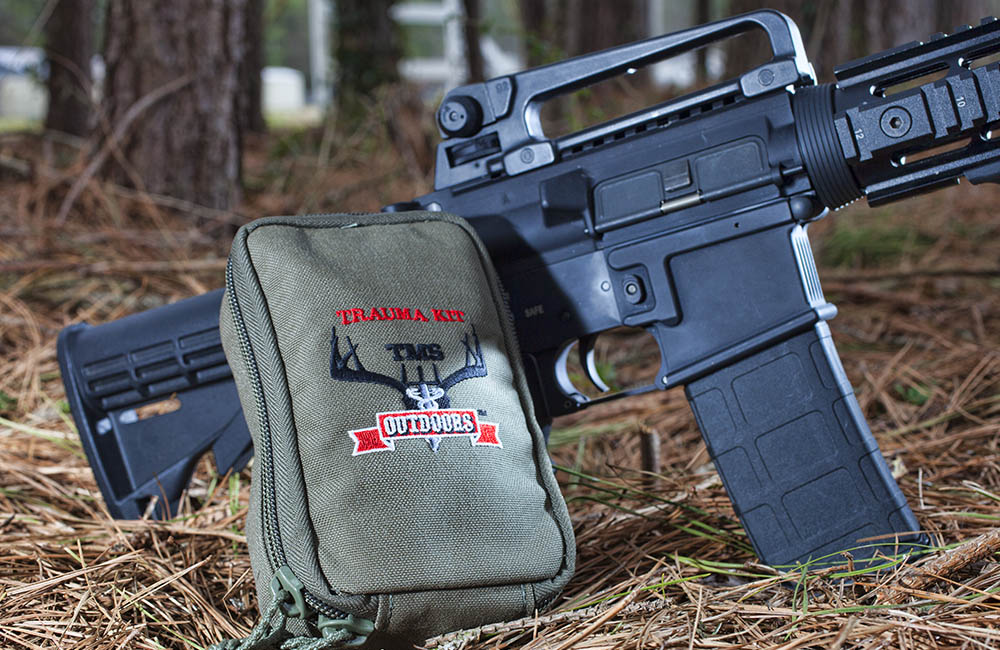 The U.S. Military has worked hard on the IFAK concept, and the research shows the Spartan and relatively inexpensive contents are extremely effective at saving lives. Maintain that mission-specific concept and you, too, can tailor a personalized system that will quickly become a trusted and comforting companion, regardless of pursuit, ultimate destination or distance traveled.

Interested in more? Check out: Protect Your Trail Camera From Theft.