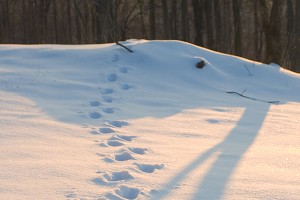 Continued from Tracking Back: Finding Your Way Back To Camp – Part 1.

Rain washes away tracks, insects crawl through them and wind obliterates details. How fast our trails become invisible depends on local conditions, and putting a good figure on age takes a ton of practice/knowledge. However, if you’ve only reached that remote stream an hour ago and are trying to determine which trail you used (even if only because that’s the one that avoids a steep ascent), the odds are probably pretty good you can rule out footprints that have nearly all detail gone—depending on soil conditions.

Figuring it out takes practice, but there are easier clues. For example, a track on top of that footprint indicates the one below is older. If you haven’t seen or heard anyone else, it’s probably not your track. When you step on a blade of grass it bends, often breaking or cracking from the weight. If that “wound” is already brown at the edges instead of maintaining a freshly damaged look—or even still bleeding moisture—then it’s probably a lot older than a few hours.

Don’t expect to find well defined, heel to toe, prints, either. A partial print that’s identifiable is fine and some practice, even slight toe digs on virgin ground and will work. Obviously, the toes indicate direction of travel, so finding them or confirming with a heel print is always a good thing.

Humans on a mission—like heading to that deer blind, waterfall or trout stream—prefer to take the same length steps en route to their destination. Sure there are those changes due to terrain, but stride length on level ground speaks volumes about the burden they’re carrying, injuries and fatigue. The basics are pretty simple and they’re a huge ally.

If the distance from one foot placement to the other is 24 inches, for example, you can expect to find another mark/clue two feet from the last print. It may have changed direction, but unless aliens have abducted the victim or you were transported from the Twilight Zone during your trip in, a foot went down somewhere in that area. Instead of carrying tape measures, we rolled a rubber band onto a straight stick to mark that length. When things got tough, it was rotated from the last known track to find the next print/scuff/scratch. Expect a slight increase in length downhill and corresponding decrease uphill.

You might think sand is ideal, but it’s tricky. It readily accepts prints, often deep enough to be impossible to miss, but that soft-setting material also quickly obliterates details and makes it tough to date. Within minutes on the beach and desert, all that’s left is an undistinguishable depression—easy to follow, but impossible to identify.

Snow can be similar, depending on conditions. It’s usually a little easier to date, though, because the edges disappear in the wind and after a day of sunshine it can melt, and refreeze in the bottom overnight.

Foliage can speak volumes. Limbs break and leaves bruise. When wind blows, adjacent bushes often comingle their branches, but when an animal or human walks between them they can “sort” themselves to one side or another. Grass usually bends in the direction of travel, although in a few hours it may stand back up as if nothing passed by at all. Dew drops in the morning, and animals collect that moisture when walking through a moist field. That dry line of so called “dew trail” is easy to spot when the light’s reflecting right, but evaporates quickly.

Serious tracking is exhausting, painful, sweaty and smelly business. It isn’t the kind of romance that attracts Hollywood, and on those rare occasions it does it’s usually portrayed as some sort of mystical feat that follows a person, step by step, across paved parking lots.

There’s really nothing magic about it. It’s hard work and I was lucky enough to learn the basics from the best. I was taught when someone walks on concrete, there’s a mark left where they left it—assuming they didn’t pile into a getaway car. The same implied tracking applies when someone enters a fast flowing river or asphalt parking lot. When stepped on, a pebble on a rock-hard desert floor concentrates a disproportionate amount of pressure below, often leaving compression cracks/marks. If it’s turned over in the process, it’s even easier to detect.

Why Give it a Try?

The odds are good you won’t ever need to find a toddler in the Sonora Desert, but there are a lot of good reasons outdoorsmen should practice some of these skills. Obviously, determining or confirming your route back to the parking lot or secret fishing hole is one of them.

There are others, though. If you’re a hunter, the ability to spot those tracks is a huge advantage. Put a time on them, and you’re a leg up on opening day.

Landowners may need to know if someone has been trespassing. Determine a direction of travel and you’re one step closer to figuring out a solution. Even homeowners alarmed by an early morning noise can take advantage of dew trails across the lawn—if they know how and when to look.

It’s not glamorous stuff, but the landscape has a lot of stories to tell…when you learn to listen.