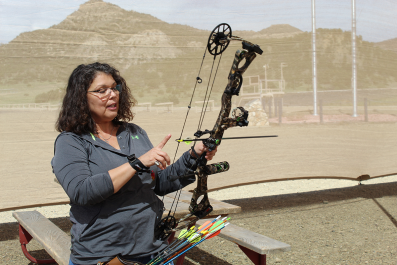 I am an archery novice. Ten years ago, I attended the Women’s Wilderness Escape (WWE) at the NRA Whittington Center in Raton, New Mexico. During the week I had the opportunity to learn how to shoot a bow. I shot the compound bow “Genesis” by Mathews. After the event I returned home, interested in buying a beginners bow, but alas, never to do so.

I returned to the Whittington Center twice more as a Pistol Instructor. It was during this time I came to know a fascinating woman named Sharon Cundiff, who had joined WWE as one of the Archery Instructors. I returned to the Whittington Center for an Appreciation Weekend for their supporters recently and low and behold, there was Sharon giving a seminar on Archery. So, when a person crosses your path on numerous occasions as Sharon and I have, it is for a reason. And the reason I believe is, so I can reacquaint myself with the passion of ten years ago and write this article based on what I had learned then and continue to learn now. I’ll also look at an ideal beginner bow model on the market today – the Diamond Infinite Edge Pro. 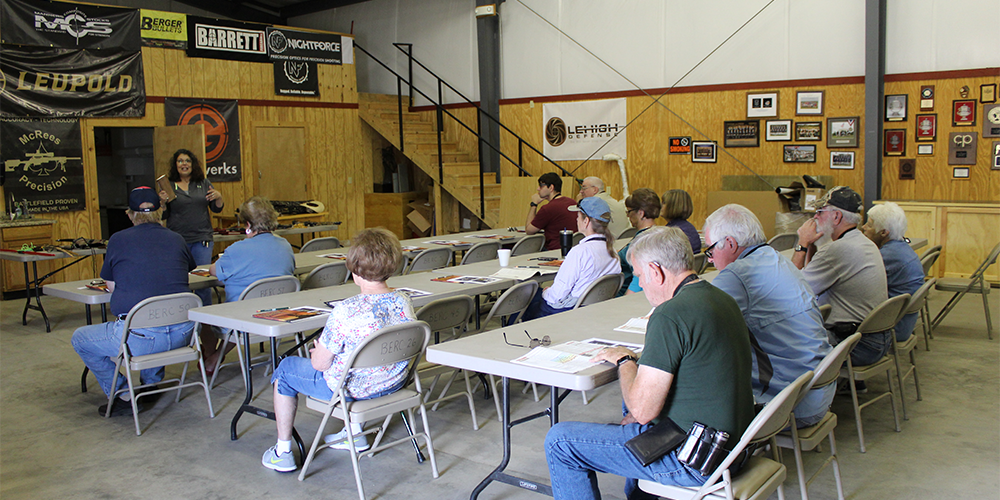 According to Today’s Bowhunter by the National Bowhunter Education Foundation, bowhunting dates to the stone age. My personal experience is from watching the early Errol Flynn “Robin Hood” movies to the more recent “Hunger Game” series. I hadn’t experienced a bow and arrow until my visit to WWE in 2008. I was excited because there is a certain romance about one’s ability to take a piece of wood and a string and propel a wooden stick with feathers through the air at incredible speed to its target.

Before I would even consider the purchase of a bow, I learned the three common bow types: Longbow, Re-curve Bow and Compound Bow. The Longbow is made of wood and considered the traditional bow requiring minimal additional equipment. The re-curve Bow has shorter limbs, a curve to its design and a “pistol-style” grip. Re-curve bows are made of laminate and their design allows for smooth, quiet and fast-shooting. Re-curve bows are capable of propelling arrows at a further distance. There is also a take-down re-curve bow which can be “tricked out” and both types of re-curve are used by Olympic competitors. The compound bow is the most popular, and it is made of aluminum or lightweight metal with wheels and cams attached to the limbs and bow string. The bow strings and cables are made of high-modulus polyethylene, which are designed to have “great tensile strength and minimal stretch-ability”. This design reduces draw weight by 50% or more. It is primarily used for hunting and target shooting. 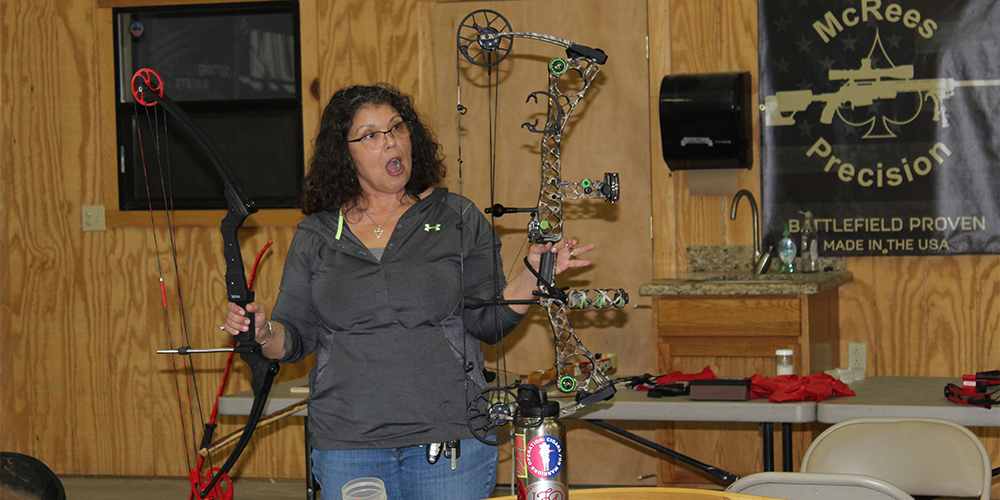 Like the selection of a rifle, the dominate eye will determine whether you’ll select a left or right-handed bow. Right-eye dominant = right-handed bow. This setup allows you to pull the string with your right hand like the trigger on your rifle with your right trigger finger. Before a beginner bow is selected, the first-time bow-hunter should be measured for draw length and draw weight:

The arrow from a modern bow can shoot up to 400 yards at 200 miles per hour. At this speed it might pass completely through an animal at 30-40 yards. Most hunting distances therefore are around 15 yards to ensure accuracy. For this reason, Today’s Bowhunter recommends “proper bow selection and fit as essential for maximum accuracy and performance.” 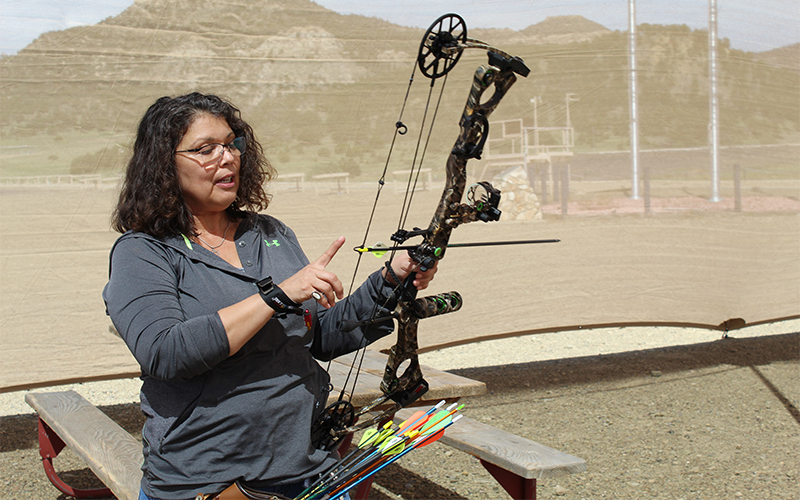 According to Sharon Cundiff:

“I am confident in saying that the Diamond Bow will meet the needs as a beginner bow if the shooter is properly fitted AND the new shooter receives training from a qualified archery instructor. Most of the bows come with everything one needs to begin to shoot. These include a d-loop, a peep sight, a rest, and a sight. A wrist strap and stabilizer are a plus. The few that don’t have the d-loop can be shot with fingers or a d-loop installed by a bow technician. The other equipment a shooter will need includes a release and arm guard, again properly fitted, as well as arrows that are weighted in accordance to the draw weight, cut down by a bow technician to the proper lengths and completed with tips weighted properly. Finally, a target which is also rated in accordance to the weight of the bow, will round out a complete kit.”

ONE OTHER NOTE: DON’T DRY FIRE YOUR BOW

In the drive for pistol perfection, “dry-firing” is the method encouraged to marry sight alignment and trigger control. Without dry-firing, this marriage is like a long engagement with no end in sight. You’ll never get to the altar and win the day. You would think this philosophy would apply to archery as well, but it doesn’t. Sharon explained that unlike a pistol, the bow because of its design “stores energy in a limb system and transfers the energy to an arrow when the string is released.” Without the arrow, the energy remains in the limbs of the bow and may injure the archer when the string is released. BIG OUCH!

Throughout history there has been a long love affair with the bow and arrow. It continues today in archery competitions, and in hunting. If you want to join the millions who shoot archery for fun and sport, purchase a good quality beginner bow from a respected and reliable source. Just as important, make sure you have your beginner bow properly fitted and learn from an experienced, competent instructor who’ll steer you in the correct direction to start your love affair.

Sharon is the owner of Range Allies LLC since 2014. She is a lifelong shooting sports practitioner. She holds instructor certifications with the National Archery in the Schools Program (NASP) and National Archery Association (NAA) and the National Bow Hunter Education Instructor (NBEF). She is also a certified Bow Hunter Education Instructor through Texas Parks and Wildlife and guides women on hunting excursions at Bug Scuffle Ranch in Texas. 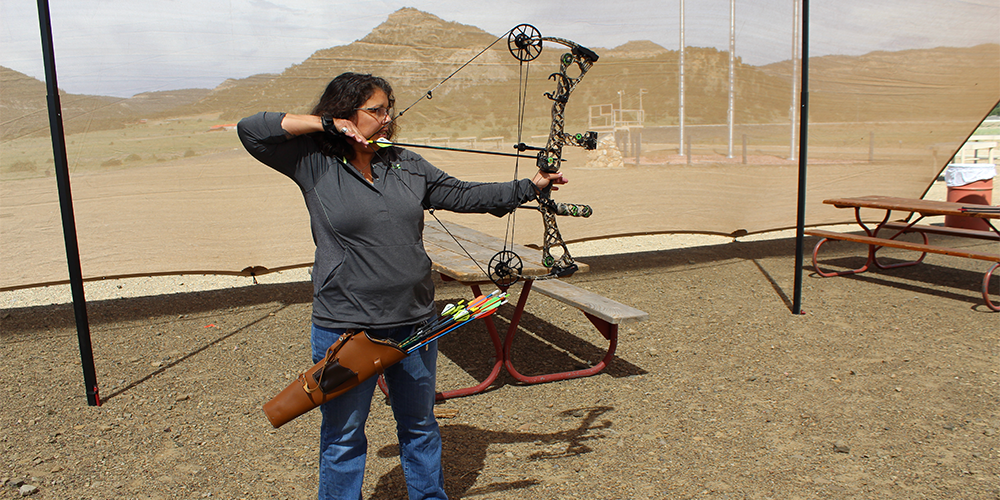