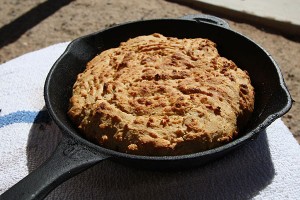 While we’re smack in the middle of the frigid winter months, we’d like to take some time to examine an important cooking tool every outdoor enthusiast should own: cast iron. In fact you shouldn’t just own one piece of cast iron cookware but many different sizes. This time-tested form of cookware has existed for over two thousand years, and it was once the primary cookware for chefs and homemakers the world over. Cast iron is strong, it conducts heat well, it can be transferred from burner to oven easily and it lasts for a very long time. Even more interesting, cast iron is still the healthiest cookware you can use today. Let’s examine the basics of cast iron use and care before you head out on your first spring camping or hunting trip this year.

Cast iron comes in a variety of styles and forms, and while most of us are familiar with cast iron skillets or dutch ovens, cast iron is also available in grills, griddles, deep fryers, woks, presses and other specialty cookware. Cast iron is heavier than most conventional pots and pans you’ll find in a modern kitchen, but this means it can last a long time if properly cared for, much longer than those Teflon or stainless steel pans common to most kitchens. Cast iron does have non-stick properties, but only if it is “seasoned” right. This process involves baking oil or shortening into the pan, a process which we’ll outline in more detail below.

There are many advantages to cooking with cast iron, but one that applies to campers and other outdoor enthusiasts especially is the ability to handle high heat. Cast iron can be placed directly into a campfire when you cook, and it can handle the unpredictable temperatures that come with a wood fire or charcoal fire. Items like dutch ovens that have a lid also allow for coals to be placed on top of the cookware so you’re heating all sides of the cast iron. Often it is best to allow air to flow under the cast iron to keep the fire lit, and a dutch oven with legs or a cast iron grill combined with cast iron cookware on top represents the best cooking setup you can have outdoors.

The biggest challenge to using and keeping cast iron is the care process. As we said before, cast iron can last a very long time when properly cared for, but its quality can suffer if you don’t use it properly.

Probably the first and most important fact to note about cast iron care is that it should never come in contact with soap. This means you can’t wash it with soap after cooking with it, and you most certainly can’t place it in the dishwasher. Instead, the best way to clean cast iron is to use hot water and a stiff nylon brush for scrubbing. You can add course salt to the cast iron to work away ingrained food if the brush alone does not do the job. Some people prefer to use soap if they clean cast iron right before seasoning it, but really soap isn’t a necessary component in the cleaning process.

You should wait until the cast iron has cooled before attempting to clean it. For one, cast iron can remain hot for a long time after cooking, and this includes the handle. Make sure to use a cast iron handle cover or oven mitts to hold a hot cast iron pan. More importantly, cast iron can fissure or warp if cold water is added to it when it is very hot. Even if you’re using hot tap water to clean your cast iron, it is best to wait until it’s cooled so there is no threat of harming the cast iron while cleaning. Make sure you dry the cast iron completely before storing it.

Rub all surfaces with oil both inside the pan and out. You can wet a paper towel with the oil to aid in the spreading process. In the meantime preheat your oven to 350 degrees. Place a sheet of aluminum foil as large as the cast iron cookware on the bottom oven rack, and place the cast iron cookware on the rack above. The cast iron skillet or cookware should be upside down so the cooking surface is facing downward. Bake in this way for an hour. The aluminum foil will catch any drips throughout the seasoning process. Once the hour is up, turn off the oven but leave the cast iron to cool slowly in the oven for a couple hours longer. Store the cast iron in a cool place like under the sink and make sure it is free from moisture.

Whenever you store the cast iron after you cook with it, you should coat it with a light layer of the same high smoke point oil. This will help it last longer as you store it, especially if you don’t cook with it often.

A surprising advantage of cast iron comes in the health benefits of using it both indoors and outdoors. More and more research shows that materials like Teflon and aluminum are hazardous for your health. Cast iron on the other hand is perfectly safe to cook with. Those who have iron deficiencies will benefit from the trace amounts of iron that make their way into the food, which is again perfectly safe. (Note: enameled cast iron does not release trace amounts of iron like bare cast iron does). A well-seasoned cast iron pan will also cut down on the amount of oil you need to cook with. Anytime you can cut down on oil in your food is definitely worth doing.

Not only is cast iron tough, long lasting and easy to cook with, it is actually healthy for you as well. Make sure you’re planning your indoor and outdoor meals with more cast iron this year!

Image two and thumb and three courtesy of Wikimedia Commons.