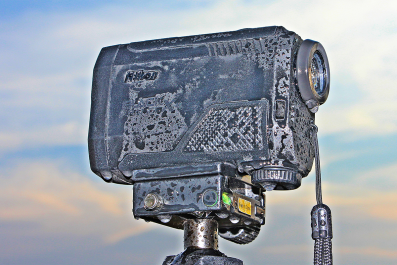 With introduction of its Black line of riflescopes last spring, Nikon Sport Optics made a bold move into the worlds of precision long-range rifle shooting and long-range hunting, as well as action-shooting for enthusiasts of modern sporting rifles based on the AR-15 and similar platforms. Satisfying the needs and desires of the most critical users demands excellence. Thus, when the Black line was expanded to include a laser rangefinder, I looked forward to testing one with great expectations. The very first animal I ranged with the new Nikon Black RangeX 4K was a black beef cow. To my surprise and sheer delight, the reading came back instantly on the very first try: 891 yards. This is simply outstanding performance! After 60 days of thorough field-testing, I believe this unit is the best compact rangefinder that I have ever used. Kudos Nikon!

I’ve noted in previous rangefinder reviews for 1800GunsAndAmmo.com that my daily commute, through the White Mountains of eastern Arizona, affords great opportunity for me to test optics on a number of game animals, cattle and horses. Variable weather – from clear to cloudy, still to windy and dry to wet – at elevations from 6000-10,000 feet, provide excellent conditions for testing and hunting simulation. Although the new Black RangeX 4K was designed for long-range hunting applications, I believe that hunters of all types – big game or small, rifle or bow – and target shooters alike, will appreciate the many features and functions of this excellent rangefinding optic.

Following is a review the main features and functions of the new Black RangeX 4K Laser Rangefinder:

Regarding performance, the first item of note is the new Black RangeX 4K does not have an image stabilization function like Nikon’s other new rangefinder, the Monarch 3000 Stabilized. This ground breaking feature was introduced last year in the Monarch 7i VR Rangefinder, with major fanfare. So… is this a problem? Not at all! Although I find the image stabilization feature to be quite useful in the M-3000-S, I prefer the Black RangeX with its more powerful laser and receiver, and well-designed body that facilitates a rock-solid hold with two hands when necessary. Although I believe Nikon’s intent was to build a following among long-range target shooters, if I could have just one rangefinder for the remainder of my hunting days, the Black RangeX would do quite nicely, thank you!

Ranging distance seems to be the big deal in the rangefinder market these days, with manufacturers making outrageous distance claims for “highly reflective” targets that are of no practical use to hunters in the field. And, let me be the first to acknowledge that I have criticized manufacturers, including Nikon, for doing so. Technical specs for the Black RangeX list a “measurement range” of 10-4000 yards, with a claim that the unit is “… engineered to deliver over 2 miles of ranging capability.” Notably missing are the asterisks and “under special conditions” disclaimers that usually accompany such lofty claims. Some reports indicate the Black RangeX can in fact measure big shiny skyscraper buildings more than 4000 yards away. Unfortunately, skyscrapers are in short supply in the mountains where I live, and I have made no attempt to identify the maximum distance the Black RangeX will measure. Frankly, distance measurement capability in excess of 1000 yards is simply of no practical use to 99+% of all hunters.

That said, this new rangefinder greatly exceeded my expectations, measuring animals and trees at distances of nearly 2000 yards, and rock outcroppings and highly reflective metal buildings another half-mile further! Following are some distances I have ranged with the Black RangeX for animals and objects listed. Some required multiple attempts or continuous ranging to obtain a measurement reading. Also, please note that listed distances do not necessarily represent the maximum this model will measure for the given target and atmospheric conditions. Distances listed were verified in most cases with confirmation readings from a Nikon LaserForce rangefinder/binocular:

This data shows the Black RangeX 4K will range animals well beyond 1000 yards under favorable atmospheric conditions. Measurements under 1000 yards were often obtained on the first attempt – a fact that will be appreciated by anyone who has struggled with finger fatigue after depressing the ranging button dozens of times to get a single reading with a less capable compact rangefinder! It’s important to note that wind and light rain reduced the measurable distance considerably for two particular targets – brown beef cows and large pine tree trunks. It was possible to measure distances to these two common objects on multiple occasions under a variety of weather conditions.

The Nikon Black RangeX 4K Rangefinder lives up to the Nikon Black standard and delivers as promised. This unit is without peer in the under $600.00 compact rangefinder class. It can be expected to excel in virtually all hunting applications for bow and rifle. It will also function exceptionally well in target shooting applications out to distances of two miles (provided the target is large!). Other than the eye relief issue noted above, the only improvements I would recommend are greater magnification and addition of a recessed tripod adapter. Increasing magnification from 6x to 8x would enhance usage on subjects at longer ranges, and I suspect that target shooters would appreciate simple and solid built-in tripod adaptability.