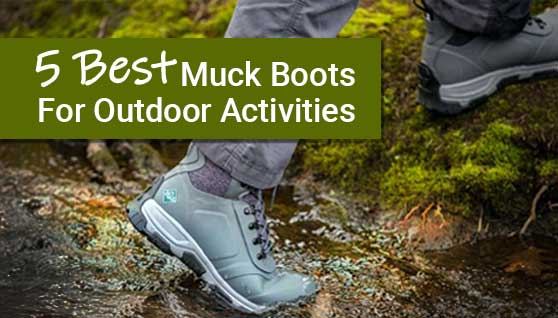 It won’t be an eye-opener to say that many people designate one pair of boots to be martyrs and endure all adversities brought about by unfavorable weather and terrain. Such an approach is pretty reasonable, to be honest. Why put the rest of your footwear through the hardships of dirt, puddles, and muck and condemn yourself to cleaning them afterward when you can choose one scapegoat that will humbly undergo all the challenges in their stead. That pair of boots usually sees cleaning only when they become twice as heavy because of the dirt, and you can’t discern the original color anymore. While this attitude is understandable, it is hardly fair to the boots you brand as your “bad weather footwear”, especially if they were not designed to withstand such conditions. There is a special category of boots that are cut out for bad weather, muck, and stuff like that. It has no generally accepted name, but “boots for muddy outdoors activities” describes it quite comprehensively. A pair of such boots probably gather dust somewhere in your grandparent’s cellar only to be taken out when the season arrives. They are probably a loose fit for you and, well, are by no means new. You can get your own pair of all-weather boots that will be your perfect fit and look shamelessly tasteful at the same time. If such a prospect piques your attention, let us introduce you to the brand that can turn the possibility into reality.

The Original Muck Boot Company leaves no room for ambiguity and gets straight to the point the moment you hear their name. It’s a brand that produces boots that can withstand muck, wet, messy, dirty muck we are all familiar with. The intention to have something to oppose this sworn enemy of clean footwear is what encouraged the founders to start their business. The goal was clear – to build the most protective, comfortable, and reliable boots that would fear no weather conditions. We won’t be the ones to judge whether they succeeded or not, for thousands of satisfied customers are a better testament than thousands of praiseful words. What we can assure you of is that Muck Boot Company manufactures 100% waterproof boots and footwear that can brave the challenges of any season.

What is it that helped Muck Boot Company earn its popularity within two decades in business? Some would say it is the freedom to innovate and experiment, that allowed the company to transcend the boundaries of the generally accepted four seasons and test their products in every single scenario. Others would claim that it is the dedication to keep people protected, productive, and comfortable during outdoor activities. The truth is all of them are right, for no story of success consists of only one page.

The dedication and freedom are all good and everything, but at the end of the day, it is the product that determines the fate of the brand. Unlike us, Muck Boot has never been particularly fond of singing the praises to its goods, preferring silent reliability and diligent consistency in everything the team does. Even though the brand’s product line is varied, all boots feature some similarities that make every pair astounding in what they are designed for. All seams in Muck boots are cemented, stitched, and sealed with rubber tape. That is the first of the two components that ensure every boot’s waterproofness. The second element of this equation is scuba-grade neoprene that, in addition to being waterproof, ensures natural insulation, while being flexible and pleasant to touch. The durability these boots are famous for is achieved by multiple layers of rubber in those places where it’s needed the most. Toe and heel areas feature coarser textures and the heaviest rubber for the ultimate protection.

Let’s move from theoretical questions to concrete examples of Muck boots we have for sale. The brand doesn’t confine itself to a certain age group, so our top includes Muck boots for men and women, as well as footwear for children.

The first pair of boots can fit anyone, given your foot of appropriate size. The Muck Boot Arctic series includes boots designed to withstand harsh winter frosts. From sub-freezing temperature to extreme cold, these boots won’t let cold air infiltrate your personal leg space. They feature warm fleece lining that will keep you warm even when the outside temperature reaches the -40 degrees mark. The 22mm thermal foam under the footbed further increases the boot’s warmth-retaining capabilities. The steel toe protects your most vulnerable part of the foot, while MS-1 molded outsole secures it on slippery surfaces by providing traction. Do we even need to mention that this pair of Arctic Sport Muck boots are 100% waterproof? To sum it up, these are the perfect pair of working boots for chilly winter days.

If you thought the Arctic series couldn’t get any better, have we got some news for you! The Muck Boot Arctic Pro line brings the performance to a whole new level. It combines all the features found in its predecessor with several new ones. The boots feature an 8mm CR Flex-Foam neoprene liner that brings the lower temperature limit of comfortable wear to the mark of -60°F. A different color palette allows them to blend with camouflaged apparel more easily. The Bob-Tracker molded outsole simultaneously contributes to the sole’s durability and provides increased traction to support your balance on loose surfaces. Stretch-fit topline bindings fit your calf snugly, keeping the snow and cold out. Basically, if you are a hunter for whom -50°F is not a reason to stay home, then these boots are just what you need.

If you are looking for female footwear for working outdoors at a temperature ranging from sub-freezing to 65°F, look no further, you won’t find anything better. The iconic Muck boot Chore series is a treasure trove of work boots, and Womens Chore Mid Black Boots are one of its pearls. Featuring a slimmer fit and 5mm CR Flex-Foam neoprene liner, these boots retain all the features the brand is known for and modify them for warmer weather. Since these are first and foremost work boots, they are reinforced by triple rubber toes and quadruple rubber heels. The breathable air mesh lining prevents your feet from overheating on warmer days, allowing humidity and perspirations to travel through the boots. The rubber overlays and the outsole are easy to clean, so you won’t need to allocate an evening for a cleaning session. In one word, terrific. Terrific at what they were designed for.

Straying from the beaten path of work boots, Muck Boot designed a collection of light-duty footwear for everyday use. The most noticeable difference between this model and those mentioned before is the full-grain waterproof leather upper. Since these boots are intended for everyday wear, they feature antimicrobial and moisture management footbed inserts that will keep your feet fresh throughout the whole day, and a layer of memory foam brings underfoot comfort to a new level. Pull-tabs for easy on and off is the cherry on the top of this top-notch footwear cake.

Last but not least, footwear for those whose inexhaustible source of energy can’t let them sit still for a while. At least sometimes, children these days are their own thing. The Summer Solstice line comprises waterproof shoes for kids who take joy in exploring the world of the outdoors. The slip-on design allows for quick on and off, sandwich-fabric lining facilitates air circulation, and synthetic heel and toe overlays add to the protective properties of the boots. Bungee laces for higher adjustability and chevron outsole for traction – such is the recipe for an ideal pair of children’s boots.