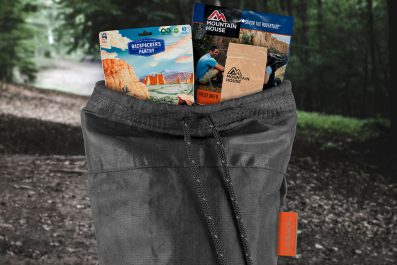 Not your burden to Bear anymore – Ursack’s guide to safe camping.

Camping is its own kind of fun. There is some primal, archetypical sense of accomplishment in getting away from civilization and surviving out in the wild. It’s not always safe, though. Natural terrain unaltered by human hands can be uninviting and dangerous, even despite its beauty. Wild animals also pose a threat, and not just the big ones.

In the wild, animals go through a lot of trouble to scavenge food. They’re not used to whole sacks of food laying around. Naturally, when they smell a few days’ worth of human food supplies, it’s like Christmas to them. Many can smell it miles away, and they’ll drop whatever they’re doing to get a bite. Squirrels and raccoons can get to your food (never underestimate the cunning of smaller animals) and mess up your supplies. Yet this is nothing compared to when a larger animal such as a bear shows up. If you think you can leave your food lying around and expect to see it in the morning, think again.

In this article, we will not provide solutions for animal attacks or surviving in the terrain itself. But we will give you a hint or two about securing your food from animals as big as bears. And Ursack will give us a hand with that.

Ursack was founded in 2014 with the aim to develop a smarter alternative to bear proof canisters. Their sacks were certified Bear-Resistant the same year. This label is given by the Interagency Grizzly Bear Committee to products that survive a one-hour mauling by a fully-grown grizzly bear. That’s neither a calculation nor an exaggeration. At the Grizzly and Wolf Discovery Center outside Yellowstone National Park, companies can have their products tested by the most gifted maulers in the world. The Ursack passed the test back in 2014, and since then the company has continued to improve its bearproof standards.

Ursack marks acceptable levels of protection as Good, Better and Best. Let’s elaborate on each rating:

Your food is protected to the “Good” standard if it is inside the sack and hangs on a branch, so it doesn’t have to bear the weight of someone stepping on it.

The protection level is “Better” if you add an Odor Barrier bag. Put the food in the Odor Barrier bag, zip it up and put it in the bear sack. This way you can hang your Ursack up high or hide it under rocks, earth and vegetation. If the Odor Barrier is zipped tight and there’s no trace amounts of food outside it, animals won’t smell your food. If it is properly hidden, there’s no way they’ll ever find it.

Still, mistakes can be made and if the bear trumps on your supplies, they’ll bear little resemblance to what they used to be.

“Best” means all the above, plus an aluminum liner protecting your supplies from compression. Hide it knowing it’s protected no matter what or tie it to a tree and witness the bears’ failing attempts on your snacks.

Ursack offers many products varying in specifics of use and levels of durability. Here are some of the most popular:

In bear country, you’ll need a stronger Ursack than the Minor, but it works great against smaller critters. Don’t let cute Raccoon videos on YouTube fool you – they’ll do anything to get a bite of your delicious breakfast. Plus, smaller critters are more common, quieter and less conspicuous than bears. To think of it, they’re near-perfect camp robbers. So, close your Ursack Minor tight and hang it high to give them a hard time stealing your meal.

The Ursack Major replaced the S29.3 AllWhite model and is virtually identical to it. It has the same size variants and standards of rigidity. The Major is bear-tested and comes with a lifetime warranty against ripping and punctures larger than ¼ inch. Like the Minor, this sack is made of Kevlar, but it boasts a thicker weave. This makes the fabric durable enough to survive quite a beating. You can find a video on YouTube of bears biting and pulling on an Ursack Major with little success.

Both the Major and the Minor have their pros and cons. The Minor is virtually puncture proof but lacks the durability needed to survive a bear attack. Similarly, the Major is extremely tear-resistant but falls victim to the sharp teeth of smaller animals.

When I first looked at the AllMitey, it seemed to have been designed to survive a nuclear strike. It’s nearly twice as heavy as the Major but its durability corresponds. It utilizes Kevlar and UHMWP mix which resists both tearing and piercing damage. The AllMitey serves to upset beasts of all genera and sizes, so much so we almost felt sorry for their wasted time.

The O.P.Sak is a sealable plastic bag made from polymer materials picked for their odor-blocking qualities. Seal the food inside the O.P.SAK and animals will have a very hard time finding it by smell.

Add the Aluminum Liner and even if a bear steps on your supplies, they will remain intact in most cases. Hang such three-layer protected food supply up high and even if a bear manages to bite on it, no damage will be done to the contents.

The GrrrSack has nothing to do with bearproofing. It’s a chew toy for dogs but it’s made from the same fabric as the Ursack AllMitey. See how the teeth of your dog stacks up against those of a bear and give your canine friend a challenge at the same time with this toy.

We’ve made Ursack seem like a magical solution to everything but there are limitations and precautions:

Something To Keep In Mind

Ursacks are a great way to secure your food supplies and yourself from predators when camping. When used properly, they draw animal attention away from your camp. If you use multiple Ursacks, they also let you recover some of your supplies while a bear is busy with one sack. This puts the safety of your camp on a whole new level, so bear it in mind next time you go camping!