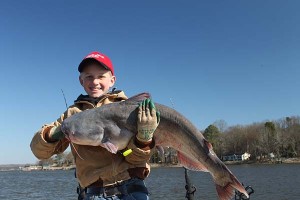 If you are looking for a voracious fish, you found it in the catfish. Found on every continent except Antarctica, the catfish is one of the most sought after food fish in the world. With nearly 3,000 species to pick from the group Siluriformes is very abundant. It can be daunting to begin a story on how to catch them. Or is it?

In North America fresh water catfish are largely grouped into three species that anglers tend to target. They are Channel, Blue and Flathead. One or more of these three are found in all of the lower forth eight states in warm swamps of the deep south to cold frozen lakes of the far north. And everywhere there are catfish, there are people fishing for them. 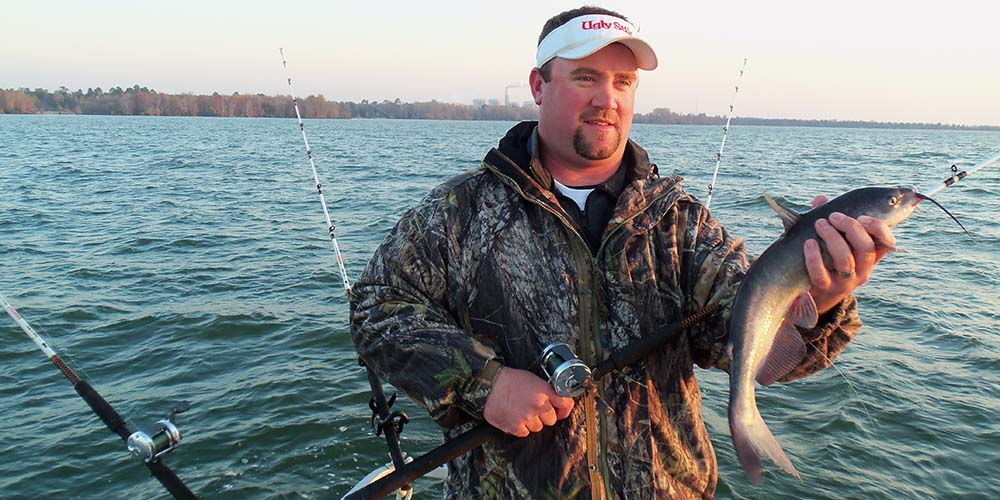 Records of these fish fall regularly. Bigger and bigger fish are being caught almost all of the time. That is with the exception of the channel catfish whose record of 58 pounds was set July 7, 1964 out of the world famous Santee Cooper reservoir. This is considered one of the least likely records to ever be broken. This is largely because a channel catfish over twenty pounds is exceptional and a ten pound channel cat is a great fish. Most of the channel catfish caught in America average between two and four pounds. This makes a fifty pounder very unlikely. Long favored for its table fare, the channel is arguably the most sought after of the three species highlighted.

Catching the channel is relatively straight forward. Most anglers prefer strong smelling bait. Catfish “stink” bait, chicken livers, and earthworms are all favorites. But with a tremendous appetite, this fish has many unorthodox baits are also used. I have known people to use chunks of cheese, ivory soap, bubblegum, and hot dogs. Almost anything you can imagine, it has been tried for these catfish.

Depending on the time of year, most of the channels are more active at night, so summer nights are often spent in pursuit of these fish. Look for deep holes near shallow water or bridges. Anchor and fan cast all around the boat with a Carolina rig style set up. I prefer a 2/0 circle hook for channel cats since their size is much smaller than the other species. Summer calls for a strong smelling bait. 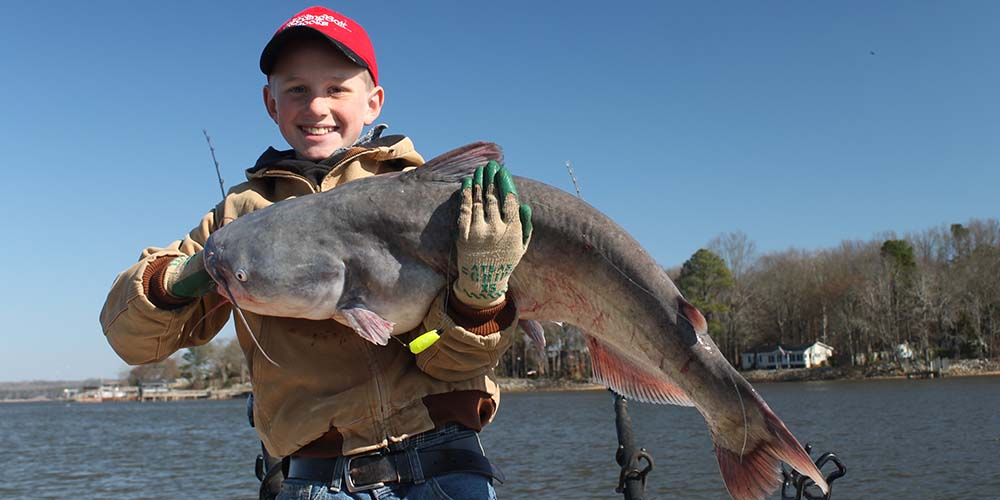 Blue catfish are also high on the list of targeted fish largely due to the extreme size they can reach. The world record of 143 pounds was caught on June 18, 2011 by Nick Anderson out of John Kerr Reservoir on the NC, Virginia border. This massive fish has a length of 57 inches and a girth of 47 inches. Indeed a monster fish. Because of these extreme sizes, many anglers who target catfish are doing so for the opportunity of hooking into these large beasts. Giant catfish of this size are estimated to be twenty years old or older. So many people are targeting these large fish that South Carolina recently instituted a size limit in the Santee Cooper lakes. Only one fish over 30 inches can be kept per day. This has really aided the survival of these trophy fish that may be decades old. As one biologist put it: “If we make a mistake in managing these giant fish, it could take a generation or more to recover.”

Blue catfish are predators and not scavengers per se’. They like to feed on fish, and live fish is a great bait for blues. They can and will eat other baits, and some have chosen to mix it up with these also. Chicken necks is a favorite among some, as is sausage, hot dogs, and shrimp. Cut bait is a personal favorite, specifically fish heads.

One guide I fished with recently who doesn’t want to be named said that without question his favorite bait is either white perch heads or crappie heads. (Note your local regulations on the use of game fish for bait). In our home state you are allowed to use gamefish for bait, but it counts towards your daily creel limit. These baits stay on your hook better and the bigger fish tend to like it.

Tackle for these big fish is big. A minimum of thirty pound braid is required with many opting for fifty pound braid with a 5/0 – 8/0 circle hook. These big fish need a big strong hook to hold them. I have even used 10/0 circle hooks when targeting giants. Drift fishing is a favorite method. Finding likely hiding places and allow the wind to push your bait through these holes. In the summer, blues can be found on the drop off of channels, and they move into the shallow flats at night. Some of the biggest fish have been caught in very shallow water of less than three feet.

Clayton Crawford a guide on Lake Moultrie likes to anchor for big cats. “I have good locations and look for the fish in these places. Then I anchor and cast out eight or ten rods all around the boat. If we don’t have a bite in thirty minutes, we move.” In the heat of the summer, Crawford likes to find some moving water, but not too fast: “A little current is best. It tends to keep the water more oxygenated and the bigger blues like that.” Crawford says.

It is pretty common to catch channel and blue cats in the same local. They are opportunistic feeders and will often share the feeding grounds. As with other species, fish of similar size swim together. So if you catch one twenty pounder, hang on because there could be a half dozen more in the same area. 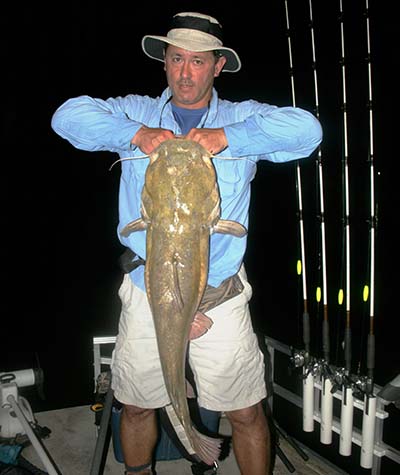 Flathead Catfish are different from the others in that they prefer live bait. Very few flatheads are caught on dead fish, stink bait or anything other than live fish. Those targeting flatheads will use bluegill, white perc, yellow perch and shiners to catch big flatheads. The record for biggest flathead ever caught weighed in at a whopping 139 pound 14 ounces from the Arkansas River. Flatheads were introduced to many rivers and streams across the country and have become an invasive species in many of these rivers and streams. Being such a voracious feeder, in some areas populations of pan fish have diminished significantly due to the presence of the flathead catfish.

As mentioned, flathead catfish prefer live prey, specifically fish, and to a lesser degree crawfish. Anglers who target them will often use what is known as a “limb line” to catch them. Anglers hang a strong nylon string from a limb overhanging a river, topped with a 10/0 circle hook and baited with a live bluegill, or shellcracker. The bait is left there to swim around until a flathead eats it and hooks himself. Other methods include trot lines, and jugs, which are floating bottles with hooks dangling with bait. As the fish eats the bait, the buoyancy of the bottle actually sets the hook when they try and swim away.

Flathead catfish are not nearly as palatable as the other two species. Most who target them do so because of their fight and their sizes.

Regardless of which species you are after, catching catfish is a great late summer early autumn pastime. Anchoring or drifting bait along a river or lake is relaxing with the hope of catching big fish on your mind. There are few things more fun than hooking into a giant catfish. If you haven’t tried it, you should.