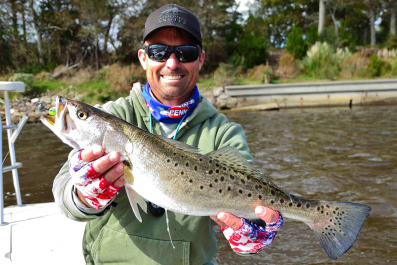 I recently got the chance to wear a pair of Fish Monkey FM11 Guide Gloves on several of my fall fishing adventures in Coastal South Carolina. While I rarely wore gloves in the past for any reason, after wearing the Fish Monkey Half Finger Guide Gloves all day long on a half-dozen speckled trout fishing trips this fall, I have a new appreciation for fishing gloves. I never thought of myself as a glove guy until now.

People wear gloves for a wide variety of reasons from keeping digits warm during winter outdoor activities to blister prevention while splitting logs for the fire pit. Everybody wears gloves for one common reason, to protect the hands from something and often gloves are worn for comfort when some level of physical or environmental irritant has the potential to cause distress.

Again in the past, I rarely wore gloves unless it was on the ski slopes or if I was swinging a bush axe all day opening up an access path to a new deer hunting spot. I never have considered wearing gloves while fishing during the summer, fall, or any other time of year. Even when the mercury plummets near freezing, I always have avoided wearing gloves fishing because I like to retain my dexterity to keep directly connected to my fishing gear. But, after wearing the Fish Monkey Half Finger Guide Gloves on several outdoor adventures, I am a new believer that anglers can receive the benefits of hand protection without losing any critical tactile abilities.

As soon as I slid my hands inside the gloves, they fit snug and comfortable. They provide four way stretch capability and feel like a second skin. I wore them around the house for a few hours and it didn’t take long until I forgot I was wearing them. It wasn’t until my 5 year-old son Blake asked me why I was wearing gloves that alerted me I still had them on. But, I knew it would be quite a different situation out on the water when I was trying to cast, tie on lures, and take fish off the hook.

First True Test in the Elements

On my first trip to the water, the weatherman was predicting our first freeze warning of the season and I knew it was going to be quite chilly. I brought an extra pair of winter ski gloves for backup because the half finger guide gloves aren’t insulated and they aren’t really intended for winter weather. The Fish Monkey FM11 Guide Gloves are more designed for three-season use. But, I went ahead and started the day off with the Fish Monkey Guide Gloves even though it was 34 degrees with a stiff breeze out of the north. To make a long story short, I never took off the gloves all day long.

Even though the gloves aren’t intended for winter weather, the stretch fabric provided thermal protection and didn’t allow wind to penetrate through. My hands remained pleasant all day long. The warmth I received from these gloves was a pleasant surprise that allowed me to wear them throughout my entire fishing adventure.

Next, the true test came when I shut down my engine at my first fishing spot and grabbed my rod to cast a top water lure along an oyster-covered bank. Again, I was able to cast and handle the line without any disconnection. The second-skin like fit and the exposed fingers allowed a seamless connection that didn’t inhibit my casting or retrieving ability. The Fish Monkey Gloves were making me a quick believer and I was enjoying them from the start.

Then, I hit a major snag just a few minutes into the trip. On my third cast, a massive wind knot erupted at the end of my rod where I had to immediately cut out the bird’s nest and retie. As frustrating as it is first thing in the morning, I was able to handle the thin braided line and retie without any impairment from wearing the gloves. I was quickly back in the saddle and I had a frisky four pounder crush my top water lure on the next cast.

Just like any other fall day in the Carolinas on my boat, the speckled trout were plentiful and well over 50 fish were caught and released. I continued to wear the gloves until I arrived back at the dock.

Over the next 10 days, I got a chance to wear the gloves on a half-dozen fishing trips. Our typical fall weather in South Carolina ranges from sunny 80-degree days to near freezing conditions. And the South Carolina weather didn’t disappoint. On hot and cold days, as well as, windy and wet days, I wore the gloves on every trip. My hands didn’t get cold on cool days and my hands didn’t get hot on warmer days.

In addition to hundreds of speckled trout, I handled redfish, flounder, bluefish, and striped bass with the Fish Monkey Gloves and I felt extremely comfortable the entire time.

While the gloves felt comfortable on my hands on every trip, I can’t deny that the synthetic leather pads on the finger tips and palms did lose grip after getting constantly marinated in fish slime. Speckled trout are coated in a thick protective slime and it will adhere to anything including the surfaces of the Fish Monkey FM11 Guide Gloves.

Truly, no gloves will repel the power of fish slime, and I just used my hand towel after each fish to remove the majority of the slime as I would on an ungloved hand. Then I was right back in business making my next cast. My hand towel easily removed the top coat of slime from the gloves, and the synthetic leather pads again provided the necessary hold on my cork-gripped rod handles.

The only other downside I discovered was inadvertently lodging my ultra-sharp hooks in the gloves while de-hooking a fish or re-tying lures. Hooks would get embedded in the fabric of the gloves where you had to remove the entire glove to remove the hook. Luckily, the fabric is tightly woven that helps prevent hook ups. I also learned to be a little more careful when handling hooks with gloves on. I rarely had that issue again.

The Fish Monkey FM11 Guide Gloves are called performance fishing gloves for a good reason. They perform well in a variety of situations. All Fish Monkey Gloves provide a 360-degree SPF 50 protection from the sun, and this is something few anglers consider when going on the water. Hands are nearly exposed 100 percent of the time, and this vulnerability makes them susceptible to skin cancer. The gloves block the harmful UV rays helping protect anglers from overexposure.

In addition to providing 360-degree SPF 50 sun protection, the synthetic leather pads on the gloves protect angler’s hands from accidental puncture and abrasions from a fish’s mouth. Some fish have sharp teeth and others may just have a sandpaper-like lip. And when a water-logged hand regularly encounters these sharp and abrasive surfaces, injuries can and will occur that will detract from the enjoyment of a fishing trip.

The fish I catch all have either a rough mouth or sharp teeth and I appreciated the protection of the synthetic leather. During the fall and winter, I fish a couple days per week and my hands and fingertips always look like I have run them over a grater. Yet with the Fish Monkey FM11 Guide Gloves, my hands don’t bleed or ache anymore from constant abrasion from fish’s mouths.

The synthetic leather pads are non-slip and provide both protection and traction when handling fish and other on-the-boat duties. The thick pads will also protect hands while handling anchor rope or poling across a grass flat all day long.

The Half Finger Guide Glove was my choice for the activities in my neck of the woods. But, Fish Monkey produces a long list of other glove options for every angler’s need from wiring in a 600-pound blue marlin to ice fishing for Arctic Char in the Hudson Bay. Learn more about everything they carry at gritroutdoors.com.