“SLAM!” The gigantic splash shattered the silence of the otherwise calm lake. Like a cinder block had just attached itself to my line, my 7 weight fly rod bent in half and the game was on. I had challenged myself to catch a pike on a fly rod this summer, and I after a handful casts I had one on. After getting he fish under control, and tiring it out (I had forgotten my landing net) I hoisted my trophy into the boat for a few pictures. Certainly not my biggest pike, but my first on a fly. The fish is one I’ll never forget. 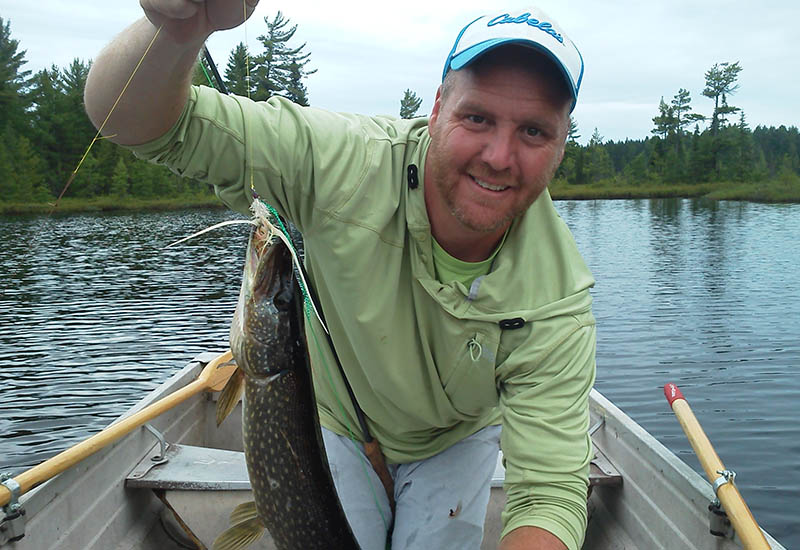 My quest began this winter when I was bored and watching You Tube videos about fishing. I’m always looking for a new challenge, and I was continuing to see many short clips of people struggling to land pike with fly equipment. I’ve caught countless numbers of the toothy “freshwater wolves” on spinning gear but never on a fly rod, so naturally my interest piqued. I soon realized that I already had a perfect rod for the challenge, a 9′ 7 weight, so half the battle was already won. As with any fly fishing situation, there are two choices, dry or wet? I chose to use streamers because where I would be fishing I thought the best approach would be to rip streamers trough the water like wounded bait-fish. Some may choose large poppers but I chose to keep it wet.

The rest of the winter when I had free time I tied pike flies. I simply used bass worm hooks, and they worked fine. I know more advanced fly tiers may choose other hooks for pike but for me the beginner they were fine. I also used some other large hooks I had laying around my tackle box. I tied a weighted leader to my fly-line to help sink the flies so I didn’t need to weight them down much. I tried to follow a few patterns online but eventually just made up my own. Basically anything long and flashy would do in my opinion. With a dozen or so pike flies and a heavy rod with proper sinking line, I was ready to go. 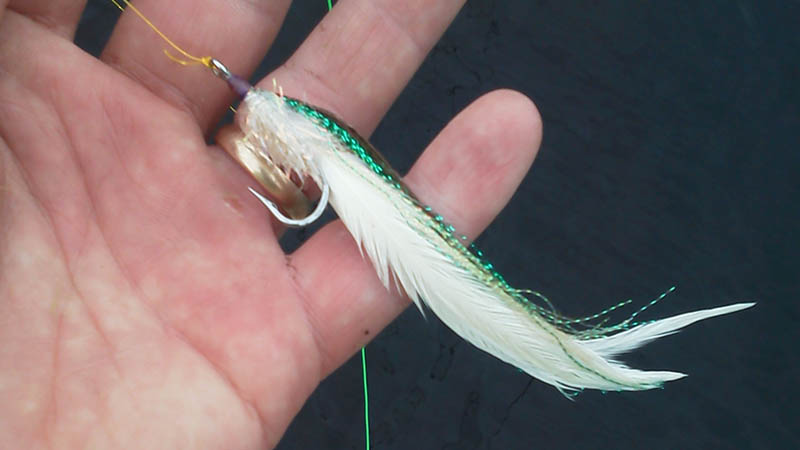 Precious fishing time is so limited so I didn’t have much chance to fish until my family was on vacation. My oldest son made it out fateful day and it didn’t take long for action. A few casts into the trip my son hooked a nice one on a jerk bait. My fly was hanging off the boat because I hadn’t even had time to get setup yet. As I was helping him land his (yes… without a net) another pike came up from the dark depths of nowhere and slammed my fly! He didn’t get hooked, but the scared look on my son’s face was priceless. I knew we were in for a fun morning.

We were fishing a quiet lake surrounded by an old cranberry bog in Michigan’s Upper Peninsula. My strategy was to get my lure as close to the bushes that lined shore as possible, and then work it out to the deeper water toward the boat. The longer the line was in the water, the deeper it sank so it worked out perfect with the water depth increasing as well. 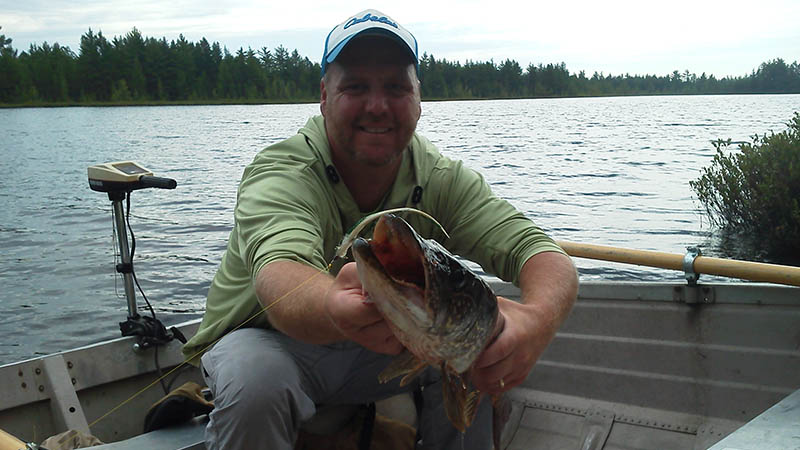 Anyone who has ever cast a fly rod knows you have to build up to the event by doing many “false casts” loading line and building momentum. Usually in a false cast the fly doesn’t hit the water. In my situation though, my flies were big and I was letting them hit the water each time, making a huge ruckus. My thoughts were that any pike in the area would hear the commotion and come check it out. By the time I did let the fly sink, hopefully a hungry fish would be lurking nearby. I retrieved the flies by erratic jerking motions followed by quick sprints. I also constantly kept my index finger on the line acing as a “brake” of sorts in case I got a strike. When I did have a fish on, I quickly held down the line with my index finger keeping tension on the fish by reeling up my slack and “getting them on the reel.” Once on the reel, I could easily use my other palm as a rag, controlling the fish.

Well, my plan worked and soon after I was hooked into the fish I described above. Eventually I landed three pike that morning, all on my fly rod. The adrenaline rush I experienced by fly-fishing for pike is incredibly addictive and I am now completely hooked on chasing these toothy rascals with my fly rod. 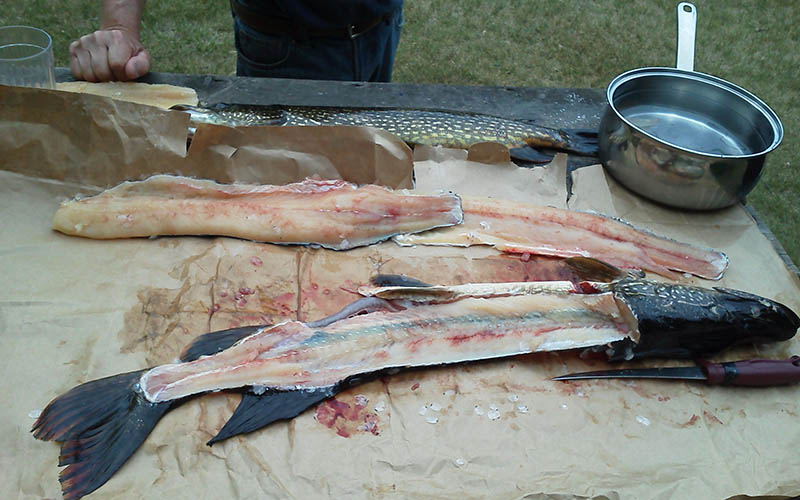 Many people throw pike back, only valuing them for the fight because they are very bony. I however know how to fillet them and love their delicious meat. Basically I simply fillet the fish like I would any other. I take the skin off as well. Then, I feel for the “Y” bones with my fillet knife and delicately follow their contour. By doing this, I create a nice long strip of meat from the fish’s back. After that, I cut off the strip below the Y bone as well, leaving myself with a bony center section I throw out an two nice boneless strips of delicious pike meat. I liken pike to the taste of walleye. My family loves fried fish, so one the pike fillets are done, we chunk them up and batter them for their date with the cast iron skillet and hot oil = YUMMY! Look online for videos that better show how to properly fillet pike. 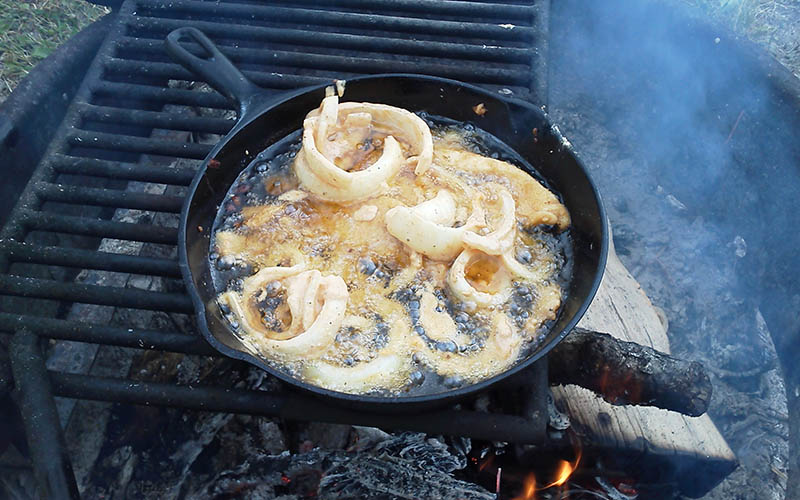 Get out and try fly fishing for pike this summer. Who knows, maybe you will realize you love fly fishing? Or love catching pike? Or best yet, like both but LOVE eating pike! Have fun.