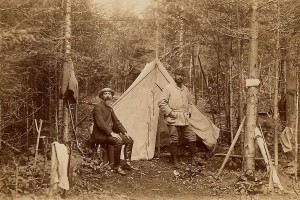 A hunting camp is a hunter’s sanctuary away from home. It can take many forms. Some hunters travel to hunting cabins and repurposed shacks as the season gets underway, while others rough it with tents in a primitive campsite. However you choose to arrange your hunting camp, there are plenty of essentials that you’ll need to make it as comfortable as possible. Comfortable you say? Shouldn’t you be focused on hunting and everything else be secondary? Well, yes that is true, but the camp itself is part of the experience of hunting, and you want to make it an appropriate place to share stories, plan tactics and kick back after a hard day with your hunting compatriots. Let’s take a look at some common essentials you’ll find at a common hunting camp.

For most of the US, hunting season coincides with a drop in temperatures. For some areas it is just a slight chill, but for others it can be downright frigid. The only way to truly combat this cold, especially after dark, is to bring a serious stock of firewood. Whether you’re cutting and stacking it well in advance at the hunting cabin or loading it up in the pickup and hauling it to camp, just make sure to bring a lot of fuel. Hunting camp just isn’t the same without a roaring fire.

If everything goes right, you’re going to have a serious amount of meat on your hands. Unless you’re well-outfitted with giant deep freezes in your hunting cabin, you’ll need several coolers and plenty of ice for the camp. We’re beginning to sound like a broken record here at Gritroutdoors, but skip the cheap coolers and get something with the ability to hold ice for several days. We recommend K2 Coolers, but there are plenty of other heavy-duty cooler options on the market. It’s not a bad idea to get an earth or natural colored cooler over the bright white cooler for hunting camp either.

What’s a hunting camp without a ton of hunting knives lying around. Everyone should have a knife or two on their belt, and there should be a few backups in the camp just in case. Really, there is no better opportunity to wear a hunting knife all day than when you’re at hunting camp. For a complete solution, check out hunting knife and skinning knife combos that will ensure you’re ready for some serious processing at camp.

While you’re hanging around hunting camp, it can be easy to forget the importance of scent control, or even accidentally contaminate your hunting gear with unnatural scents. Luckily a new breed of gear is aimed at complete scent control from home to vehicle to camp and then out into the field.

Aside from scent control containers, it’s wise to dress in scent blocking gear. Sitka Merino wool apparel is a good natural option for clothing, and you’ll also want to check out what ScentBlocker offers with their Trinity Scent Control Tech. You can finish your scent control regiment with sprays for your clothing, boots and gear like bows. That said, don’t make the rookie mistake of wearing your hunting clothing casually around camp. We recommend a casual hunting wear for those times when you’re just kicking it around camp, especially if your buddies are grilling, smoking cigarettes, etc. Check out our collection of clothing for a complete look at hunting apparel for the field and camp.

Although hanging out at hunting camp is a great time, there’s plenty of work to be done, which means early mornings and sometimes late nights. You’ll want plenty of gear to keep going after the sun sets, which means powerful flashlights and versatile headlamps. It’s always a bonus to have camo pattern lights so you don’t have to worry about hiding a neon green headlamp when you’re hunting during the day. You’ll also want to look for a high lumen output in your flashlight so you’ll get plenty of light for tracking, field dressing or whatever else you’re doing.

You’ll need an effective method of hoisting a deer and getting it ready for processing and skinning. Those who have a permanent hunting camp will have more established hoists and racks, but if you’re only camping temporarily, you’ll need something that is portable. If you go the portable route, make sure to select a hoist that is well-built, as you won’t want the thing capsizing halfway through the skinning process. Don’t forget the “game hanger” or rack that you’ll attach to the deer either.

There are times when a meal goes along with an activity no matter what. This is especially true in any hunting camp. Bacon and eggs on a cast iron skillet, a steak on a cast iron grill or chili in a dutch oven are classics that you’ll want to experience at hunting camp. Best yet, if you take care of your cast iron, it’ll last countless hunting camps to come.

For those that process to some degree at hunting camp, there is plenty of cutting to be done. You’ll need to have several large cutting boards on hand for the job, and you basically have two choices. Wooden cutting board blocks are heavy duty and last a long time, but the wood can absorb some of the residue and blood over time. Plastic cutting boards on the other hand are lighter and won’t absorb anything, but they do look “generally” less cool.

Hauling your deer back to camp can be quite the workout if not a grueling task depending on how many miles lie between. Sure you’ve probably got some buddies around to help you lug the deer back, but it’s always better to have a ATV to do the job instead. ATVs aren’t allowed everywhere, and in some terrain it is implausible to try to access your deer via ATV. In cases like that, you can use a deer cart instead. A good deer cart will have off-road wheels and a lightweight but strong frame, although beware, the cart might also encounter some obstacles that will cause some long detours.