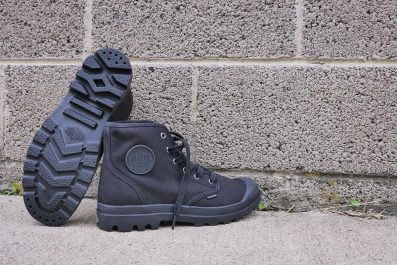 Often times in footwear, simplicity is key. Sometimes we get so caught up in marketing slogans and flashy features that we lose track of why we’re even wearing something. Palladium Boots is a footwear brand that embraces simplicity, and I don’t mean that as a dig at what the company is doing. Instead I’d argue Palladium models are a celebration of footwear designs of the past, and they hold up remarkably well today. Today let’s look at the flagship boot of this company, the Palladium Pampa Hi Boot.

When you first look at the history of Palladium Boots, it’s extremely impressive. In fact if you’re interested in the brand and you have a few minutes, take a look at their history page. To quickly summarize, Palladium started as a French manufacturer of airplane tires in the early 1920s. (Weren’t expecting that were you?) Soon they branched into making footwear for the illustrious French Legionnaire, and Palladium Boots became standard issue for all members. This is where their 70+ year history of footwear manufacturing begins. At this time, the Palladium designs were touted at strong, lightweight and fast-drying because of the canvas upper. Soon Palladium Boots became synonymous with adventure, and countless explorers used them on their expeditions.

As the times changed, Palladium became the symbol of counterculture and was popular with groups like the Beatniks, punk rockers, NY avant-garde members and the early LGBT movement. As the company evolved, it also became one of the first producers of a sustainable shoe, something that is all the rage in outdoor industry today. All these years later, Palladium still makes the same classic design designed for the French Legionnaire, but they also produce many unique, stylish varieties built for urban environments. It’s nothing short of impressive to see how Palladium Boots has stood the test of time.

As I mentioned above, the Palladium Pampa Hi Boot is the flagship model for the brand. For the purposes of this article, I am wearing the classic model in flat black. Truly it is nothing overly flashy, but I really appreciate that about this shoe. The basic design consists of a rugged rubber outsole with substantial tread (we’re talking the deepest grooves I’ve seen on a tread in a long time), and a vintage-style canvas upper. Inside the Pampa sports an EVA midsole for shock absorption and a heel cup that provides a little more stability in the back. These boots lace up to your ankle to provide added support, but the canvas sides still allow for a lot of give. All in all it is a pretty lightweight shoe with the majority of weight located in the rubber outsole. I’ve only worn these boots a little while, but I imagine the rubber outsole has a long lifespan given how rugged it is out of the box.

Pampa Hi Boot In Use

Although I’ve worn the Palladium Pampa Hi Boots on some hikes, generally I consider this an urban shoe. Honestly I’d rather tackle a rugged trail with a dedicated hiking boot over the Pampa. Instead the Pampa Hi is absolutely an urban boot perfect for hitting the coffee shop, catching a local concert or kicking around a patio at happy hour. Even though I wouldn’t necessarily choose this for hiking, it’s still extremely comfortable to wear. The rubber outsole and EVA combo do an excellent job of absorbing shock, and it is a pretty nimble shoe despite the large outsole.

The canvas upper is flexible and quite comfortable to wear, even in warmer temperatures. However if you’re encountering colder climates, take note that the canvas is basically useless when it comes to insulation, and you’re feet are going to get pretty cold in these after some extended exposure. Still I consider this more of a three season boot that’s a great substitution for your sandals when the temperatures drop a little on a warm summer night. As a bonus, if you’re someone who likes to wear shoes without socks, canvas is definitely the upper material for you.

I’ve also tested the Palladium Pampa Hi Boots on slick and rocky surfaces. I was curious to see how the all rubber outsole would perform in these key areas. Generally slick surfaces like wet pavement will be encountered much more in an urban environment, but slippage due to rocky slopes is also worth testing. Again the serious tread of the Pampa really shines in these tests as I never lost footing in either testing environment. This tread can really hold its own, something you won’t see in most urban sneaker / book crossovers.

The timeless look of these boots is a huge plus, and there is a lot you can do with these fashion-wise. I can’t help but visualize wearing these boots at a rock show with a pair of torn jeans. That’s the kind of style you’re looking at with these cool, classic boots. The history of counterculture with Palladium is a nice bonus as well, and they are essentially a rugged, beefed up version of the classic Chuck Taylors. Those unfamiliar with the brand are sure to give them a look, and those that know it will pass on respect.

There are many different versions of this boot, including some limited editions, and they are available in both men’s and women’s sizes. There is an interesting version in this style called the Palladium Pallabrouse Boot that has a folded over ankle portion. I can’t say I’ve ever seen that look in a boot before, so it’s worth checking out as well.

Will Palladium Boots like the Pampa Hi be the only boots in your closet? Absolutely not. But are these iconic boots worth adding to your wardrobe? Without a doubt yes. The Palladium Pampa Hi Boot probably won’t be the most expensive footwear you own either, and that’s just fine. At less than $50 ($47.95 on gritroutdoors.com), this is a stylish shoe that isn’t going to set you back too much. This said, you’re definitely getting a lot of value for that price, even if you’re just matching the Pampa Hi Boot to a couple outfits in your wardrobe.

Perhaps the best aspect of these boots are their unique nature and the history of military, expedition, and counterculture use that surrounds them. In a way I feel like I’m wearing a part of history in a boot that some have forgotten about. And truly what is more desirable than sporting some footwear with real history that also makes the casual observer wonder where you got those boots. All in all the classic look of Palladium Boots should not be passed up. My recommendation – add a pair to your collection as soon as possible.