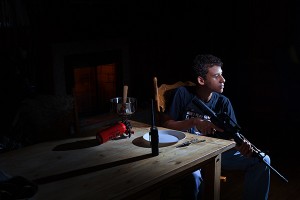 Sensationalistic websites and publications routinely issue doomsday predictions, building dramatic scenarios where the earth’s only survivors spend their last days in hazmat suits carrying M4s. They may be right, but before you invest your life savings and keep a gas mask under your bed, there are a lot more, very real and imminent threats than the undead.

Mention you’re a prepper at a BBQ and it doesn’t take neighbors long to insulate themselves with distance and start rumors about your heritage seed stockpile, ammo bunker and training film library that includes Zombieland, I Am Legend and Shaun of the Dead DVDs. The stereotype is deeply seated, despite the fact preparing for the unthinkable was part of the daily routine only one or two generations removed, when your grandparents kept a supply of food in the root cellar, and plenty of candles and hurricane lamps to help in dark times.

Today we expect and demand a reliable power grid, cell phones that punch an emergency signal through anywhere, fast Internet, filtered water from the refrigerator door, fully stocked ATM machines and ample gas supplies. The luxuries build a false sense of security, unfortunately, and ignore very real situations brewing in the Atlantic, drying as tinder nearby, building into a mob or probing for infrastructure weaknesses. Here’s a short list of the reasons you should at least check your flashlight batteries, refill your BBQ tank—even after grilling season—store extra water, weigh the odds of disasters in the news ever coming your way, and slowly accumulate the right supplies when feasible.

Rivers flood, hurricanes blow, tornados touch down and lightning strikes. In some cases there’s plenty of warning and time to evacuate, if necessary, but when there’s not, lives are in danger.

Hurricane Katrina is a devastating example. Despite the best efforts of emergency personnel assembled from around the nation, more than 1,000 people died when it hit in 2005. Eighty percent of New Orleans and surrounding areas were flooded and combined with raw sewage that leaked after pumps went powerless, safe drinking water became a valuable commodity. National Guardsmen distributed supplies once they arrived, but getting to them proved a challenge in the inundated streets and a working, battery-operated radio was required to determine locations.

The storm hit on Aug. 29, and by 9 a.m. more than 700,000 customers were without electricity in Louisiana and adjoining states. For some unlucky victims, it would be Oct. 15—more than six weeks—before power was restored. The numbers from the American Red Cross make it obvious this was a once-in-a-lifetime event—more than 354 thousand homes were either destroyed or damaged beyond repair, according to the organization.

It doesn’t take a predictably huge storm that deal serious consequences, as evidenced by the June 2012 derecho that began as a small thunderstorm in Iowa. By the time it hit Indiana winds had built to more than 90 miles per hour and when it reached the mid-Atlantic region a few hours later, it was lights out for 4.2 million customers.

A snowstorm was responsible for shutting power off for 2 million in Connecticut and Massachusetts (leaving some in the dark for an entire week) in October 2011, and another one did the same to more than 700,000 in Kentucky in 2009 (with outages up to two weeks). Hurricane Sandy in 2012, left 8.1 million in the United States and Canada without electricity for weeks in some cases, and forced 15 days of gas rationing in New York City.

A few days without any appliances sounds inconvenient and uncomfortable, but it’s access to safe water, inability to cook food (if you haven’t run out), withdraw cash from ATMs for necessities or even pump gas to reach emergency supply distribution points that turn things dangerous. Hopefully, your BBQ works, because that electric oven’s going to be useless. Then there’s the loss of cell phone service, whether from your battery dying or their generator backup going dry. If you have a loved one who hasn’t reported in yet, it’s not long until you’re amidst the chaos in the family sedan, driving aimlessly to uncover their whereabouts. Calling for help—if it can even reach you—will be impossible, unless the landlines are still working and staffed.

Add tornadoes, typhoons, heat waves and ice storms, and weather is undoubtedly the most deadly of our survival adversaries.

Some animals have an uncanny ability to “predict” earthquakes a few minutes before they arrive, a fact that befuddled geologists back when that was my major years ago. Science hasn’t unlocked the secret, unfortunately, otherwise we might be able to warn Californians before the next Big One.

The San Andreas Fault complex runs roughly north and south through the state, and the last time it moved significantly (released stored energy) it was to the north, near San Francisco in 1906 when the city was leveled. In the relatively unmoving south, potential energy stores every year it doesn’t shake and quake. Near Fort Tejon, it’s been 150 years since a big move and more than 300 at Palm Springs. The scary part is geologic records indicate a significant earthquake should occur every 110 to 150 years, respectively. “We think Southern California is locked and loaded, that the stresses have really built up, and when things start unleashing, they could unleash for years,” U.S. Geological Survey seismologist Ned Field told Smithsonian Magazine last year.

Wildfires are another concern, although smoke usually signals when it’s time for evacuation. Have a bug-out plan, rendezvous point with loved ones and know what you need to “save” from the homestead rather than wasting precious seconds while flames engulf your escape route.

Floods can be fickle. They saw the one that struck Louisiana in August—damaging nearly 40,000 homes and killing more than 10—coming. But, when I was doing search and rescue work, a massive flood hit southern Arizona (yes, that dry desert), devastating and isolating a pair of rural communities until the National Guard punched its way through the debris with supplies and potable water. It wasn’t predicted, and neither was the one that swept eight people to their death in a flash flood on a bright and sunny Sunday afternoon during another of our operations.

Mount St. Helens monopolized the evening news in 1980 when it erupted spectacularly. The odds are low you’ll ever have to outrun a lava flow on main street, partly because you’ll probably be buried under the ash, succumb to gas or will be too busy struggling to survive the human panic jam to even notice its moltenous approach. As an aside, 130 small earthquakes hit the mountain in an eight-week period early this summer.

When tree limbs came into contact with Ohio power lines in 2003, a series of errors led to 50 million people losing power without warning. That was human error, but the still-at-large perpetrators who shot 100 holes in 17 power station transformers outside Silicone Valley in 2013 (after cutting underground optic phone lines) did it deliberately. The attack nearly shut off all power to Silicon Valley—and an Internet without Google just wouldn’t be the same.

Then there are terrorist attacks, like the Boston Marathon Bombing. Cell phone service in the area went down due to overloaded circuits and residents were homebound while authorities searched for the culprits. Residents even slightly prepared for that brief confinement spent those hours more comfortably than others. More ominously, the terrorist cell responsible for this year’s attack on the Brussels airport had hours of videotape from a Belgium nuclear plant—footage probably not destined for their annual vacation highlight reel.

Civil unrest has reached levels unseen since the 1960s. A trend that started in Ferguson, MO, in 2014, continues to this day, recently reached Milwaukee, WI, and if it continues, “sheltering in place” could become a common request in some locations.

Most emergencies affect only a portion of the nation, but nefarious hackers could have an impact on the entire country, perhaps world. “If the goal of the ‘bad guys’ is to collapse the U.S. economic system, they are going to try and cut off the power,” warned Chairman of the House Energy and Commerce subcommittee earlier this year. “There have been reports of hacking attempts on electrical facilities by foreign and domestic parties.” An app called BlackEnergy toppled a portion of Ukraine’s power system in December of 2015, and the malware was subsequently detected on several systems in the United States. The Department of Homeland Security estimates the U.S. power grid is hacked or attacked seriously about twice a week.

The threats may seem overwhelming, but before you invest in tinfoil hats and a household Faraday cage, rule out disasters that have a low-probability of ever occurring in your location. There are also some you can do little about, although all have several common factors: You’re going to need water, food, heat, a cooking system and some evening light. Start with those as your “prepping” foundation—the same fiscally responsible system your great grandparents used—and even the neighborhood geeks (you know the family I’m talking about) will have trouble finding faulting your approach at the next neighborhood BBQ.