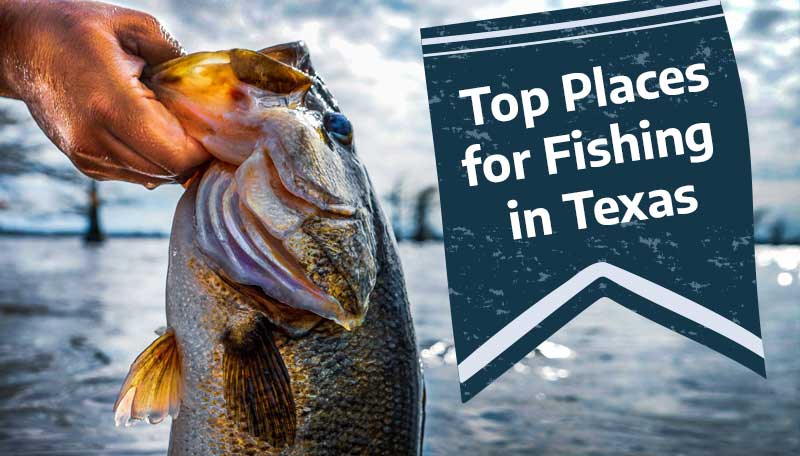 We can assume that once you’ve got here, you either are a beginner Texan angler or an avid outlander desiring to explore the underwater world of the Lone Star State. Anyway, Texas has a rich fishing culture and a lot of places where you can not only satisfy your angling urge and lock yourself in a struggle with a potential record-breaker but also enjoy the beautiful sceneries and amazing wildlife.

We understand that with thousands of water bodies Texas is rich in, it can be hard to select a couple to test your skills. That’s why we prepared a top list of must-visit places for fishing to narrow down your choice to the best ones.

There is a reason we begin our list with Caddo Lake. It’s Texas’s only natural lake. All the rest of the reservoirs were man-made in the 20th century to control rivers during heavy rains.

We can’t ignore the unique status of Caddo Lake. That’s why we believe it should be mentioned first. Besides, many consider it the most beautiful still water body in Texas. It’s only 20 feet deep but covers around 27,000 acres. The lake is dominated by aquatic vegetation of all sorts and kinds – flooded cypress forests, moss, and lily pads not only delight the eye but also give cover to cover-seeking fish.

Caddo Lake is home to a healthy community of largemouth bass. The population has grown and improved over a couple of decades, which means the odds of catching a large, 8-pound bass have increased as well. The best time for harvesting bass is spring. Other species include crappies, more frequently caught in winter and early spring, as well as sunfish and catfish, which are more active during warmer months.

The next must-visit fishing place down to the southern part of Texas, 80 miles from San Antonio, is the Choke Canyon Reservoir spanning around 26,000 acres, with a maximum depth of 95 feet. The water body was a chosen location for several fishing tournaments, including bass fishing ones, due to having one of the largest largemouth bass populations. We recommend going for largemouth bass in spring, fall, or winter.

The Choke Canyon also has a healthy, relatively large population of alligator gar. TPWD reports around 185 of these prehistoric creatures were harvested during the first half of 2020, and several of them were longer than 6 feet.

The Choke Canyon is also known for its abundance of crappies and blue catfish. The latter is going to be more responsive during cooler months. You can also try luck catching white bass.

A Red River impoundment, Lake Texoma is located on the border between Texas and Oklahoma and is one of the largest reservoirs in the Lone Star State, spanning almost 75,000 acres. The maximum depth is 100 feet.

Texoma is best known for its landlocked self-sustained striped bass population, which are found rarely in the US today. Striped bass was introduced in 1964, twenty years after Texoma was impounded. Several years later, natural reproduction was documented, and today, the population is in the clear. That’s why year-round striped bass fishing is allowed.

Largemouth bass, smallmouth bass, and spotted bass are abundant. Texoma is also the best for fishing for catfish in Texas. The lake is also home to several catfish species. In 2004, blue catfish weighing 121.5 pounds were caught. It was a local record breaker. Anglers also come to Lake Texoma to fight with alligator gar.

The 65,000-acre Amistad Reservoir, located on the confluence of the Rio Grande river and the Devils River on the Mexican border, is one of the best Texas fishing spots. Experienced anglers, however, warn the best time for fishing is spring and summer. In fall and winter, the lake is attacked by severe winds.

The primary target here is largemouth bass. Its population steadily improves each year. Also, the communities of white and striped bass began to flourish in recent years. Striped bass is sought after by many anglers because of its larger size and strong fighting characteristics. Channel catfish are in abundance in Amistad, while blue catfish are present in lower numbers.

Lake Fork isn’t the largest nor deepest, but it’s a special place that opens unique opportunities for fishing bass in Texas. In the 70s, Florida largemouth bass was introduced here, a morph typically much bigger than regular largemouth bass. Anglers pulled more than half of the largest largemouth bass out of Lake Fork.

In recent years, channel catfish has become another draw. Its population is on the rise. Other species include crappies (particularly black crappie), winter white bass and yellow bass, and sunfish, more active during spring and summer.

Conroe is a pretty famous place since it’s one of the three Texas lakes that held the Bassmaster Classic tournament (along with Texoma and Ray Roberts). Our beloved largemouth bass is the most abundant sportfish here, obviously. However, the reservoir is also considered a catfish lake. You can try luck with blue catfish and channel catfish, black and white crappies (frequent catches during spring and fall), flathead catfish, and bluegill. In 1995, the introduction of hybrid striped bass added a new dimension to the sport fishery.

Of course, these, by no means, are all the best places for fishing in Texas. The list can be further expanded to include Lake O’ The Pines, rich in year-round crappies, catfishes, largemouth and smallmouth bass, and sunfish, Falcon Lake, Toledo Bend Reservoir (the Texas southwest hub for alligator gar), Alan Henry Reservoir, Granger Lake with its strong populations of crappies and blue catfish, Sam Rayburn Reservoir, and so on. So pick up your rod and reel and catch your fish on one of the best fishing lakes in Texas. Also Check out our collection of Sealife underwater cameras.